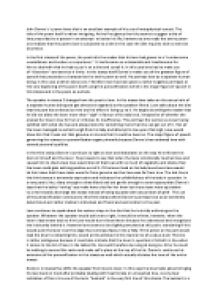 ﻿John Donne?s ?s poem loves diet is an excellent example of his use of metaphysical conceit. The title of the poem itself is rather intriguing. At the first glance the title seems to suggest a diet of love prescribed to a person in an attempt to better his life, however as one reads the entire poem one realizes that the poems love is subjected to a diet in this case the diet requires love to exercise discretion. In the first stanza of the poem, the poet tells the reader that his love had grown to a ?cumbersome unwieldiness and burden us corpulence.? It had become so unbearable and troublesome for him to deal with that he had to put it on a diet and curtail it. In this case love had to make use of ?discretion? and exercise it limits. In this stanza itself Donne?s makes use of the greatest figure of speech that proceeds to characterise the entire poem as well. He portrays love as a separate human being, in this case a rather obese one. ...read more.

The last line in the third stanza is extremely expressive and indicates the unfaithfulness of the lady in question. In a very poetic line, sharp enough to draw blood and yet gentle enough to seem appropriate Donne?s says that the ladies ?roving? eye make have cried for her lover but those tears were equivalent to a mere bodily discharge like sweat instead of being equated with actual tears of grief. The use of the personification continues to this third stanza where Donne?s portrays love as an extremely determined and rather stubborn individual and friend and well wisher to the poet. Love continues to speak about the various steps in the diet that he is strictly enforcing on the speaker. Whatever the speaker would ask love to right, it would be written, however, when the lover?s lady wrote back to him Love would burn those letters because he understood and recognized the insincerity behind it. However love seems to be slightly perturbed at this point, wondering if this would push the lover over the edge thus turning a favour into a folly. ...read more.

As time goes by he realizes that the game of love is finally over and it is now time for him to continue to live his life by engaging in his daily mundane and routine activities. Donne?s makes use of personification and metaphor in the final stanza of this poem. He begins by personifying love as a buzzard, thus characterising it as being stupid. His use of a metaphor lies in line 4 where he uses the metaphor of a falconer. In this case like the falconer allows his falcon to fly high the lover castes his love as far out as he can. In the last line of the stanza the poet compares love to a game that has just ended despite several attempts he has been left disillusioned and hear broken. The rhyme scheme in this poem is almost consistent, with the exception of the first stanza where the rhyme scheme is ABACBC. Stanzas 2-5 however posses a regular rhyme scheme which is ABABCC. The tone of the poem cannot technically be called entirely negative although it portrays love in opposite shades of white and black, while the speaker considers love in a more negative tone, love himself comes across as being rather positive. ...read more.