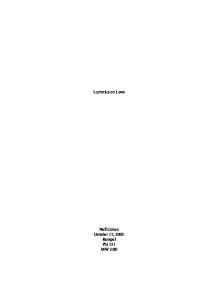 Lucretius on Love Nell Cohen October 17, 2005 Rempel Phi 151 MW 2:00 Titus Lucretius Carus was an epicurean poet writing in the first century BC. His six-book Latin hexameter poem De rerum natura (DRN for short), variously translated On the nature of things and On the nature of the universe, survives virtually intact. In this book he extensively discusses love and sex from the epicurean vantage point. He offers his reader not just cosmological understanding but the full recipe for happiness, as a complete Epicurean. Book 4's treatment of sex (1037-1287) includes denouncing and deriding the folly of enslavement to sexual passion (1121-1191). Lucretius begins his narrative on love and sex with puberty, describing it as "The stirring of the seed within us takes place...when adolescence is just beginning to strengthen our limbs." He continues to explain that humans can be aroused by different things, but "human seed can be elicited from the human body only by the influence of a human being." His reasoning of an orgasm is the seed travels from multiple parts of the body and culminates at the genitals. The genitals are then enticed to "emit the seed toward the object of our dire craving." He explains ejaculation by the mind being "wounded with love." He furthers the violent analogy by stating that whenever one is wounded, he would fall towards same direction from which the wound was given. This is a direct comparision to one wishing to ejaculate towards the enticer that has caused such a love-struck wound. ...read more.

If one has found a woman he loves, then to remember that "there are others like her; we have lived without her until now." He writes that women attempt to seduce men and make themselves available for men by using makeup, perfumes, et cetera. Even the lovesick, when sexual pleasure is shared, long to separate (1200-1209). Lucretius explains the appearance of dominant traits of children through the overpowering of one of the lovers engaging in sexual intercourse. He also goes on to educate the reader about impotence among men and women. He states "sterility is either the excessive thickness of their semen, or its undue fluidity and thinness." He explains the compatibility of partners determine conception and different positions and moments that can induce and prevent pregnancy. Lucretius ends by explaining that it is not divine intervention that causes love, but rather behavior, way, and "neatness of her person." Utmost, he finishes with saying that love can be generated by habit (1250-1287). Lucretius' view on love is rather empathic of human emotion and lacking of the care and trust that goes along with consummation. Epicurus viewed emotional entanglement as a horrible type of pleasure; thus, emotion that was sexual was an enormous threat to the mental stability of a man. Lucretius followed Epicurean ways in believing that sex did nothing for an individual other then foster the yearning for more sexual pleasures. Relationships were not encouraged, but friendships that could benefit one were encouraged by Epicurean ethics. ...read more.

Overall, I felt that Lucretius was a great poet and writer. He had a very different thinking process from the mainstream classical philosophers. He facilitated Epicurus' ideals and theories, yet failed to make them appealing. He was harsh and critical on emotions, especially dealing with love. His writing, I felt, were more of a spurred lover that had been bitten by infatuation, and he was then wronged. Thus, he felt the need to obliterate the whole love process all together. What was left was sex, which be all means he did not object to, but rather the passion and infatuation that often leads to the pain that accompany sexual emotions. Nothing in the passage was explaining the exact nature and proceeding of love, but rather how to avoid love and its fallacies. I cannot see many people actually empasizing with the de-glamorization of love and passion to the extent to which Lucretius pushed it. I cannot see him actually holding a normal family and was quite disturbed by his interpretation of women as sexual temptresses- particularly his explanation of anal sex. Such as whores preferring it, because men like it more and it decreases the chances of the woman getting pregnant. He counteracts this comment by stating wives have no need for this use, because the love should be mutual and they should not mind to get pregnant. The vulgarities of the former statements alone make the entire commentary about love invalid. Love has nothing to do with whores, but rather relationships and the physical aspects of emotions dealing with love. In his passage he explains sex, urges and lust rather than love. ?? ?? ?? ?? 2 ...read more.