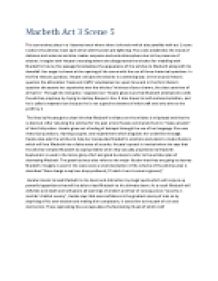 Transfer-Encoding: chunked ﻿Macbeth Act 3 Scene 5 This scene takes place in a 'deserted area' where there is thunder which also parallels with act 1 scene 1 where the witches meet each other with thunder and lightning. The scene establishes the mood of darkness and violence and also creates suspense and eerie atmosphere due to the presence of witches. It begins with Hecate's monolog where she disapproved the witches for meddling with Macbeth's future; this passage foreshadows the appearance of the witches to Macbeth along with his downfall. Her anger is shown at the opening of the scene with the use of three rhetorical questions. ...read more.

It also shows his self-centered ambition, and he is called a wayward son because he is not a genuine devotee of witchcraft and only aims to the profit by it. The lines by Hecate give a clear hint that Macbeth's reliance on the witches is misplaced and that he is doomed. After rebuking the witches for the past errors Hecate commands them to "make amends" of their folly action. Hecate gives out a feeling of betrayal through the use of her language. She uses rhetorical questions, rhyming couplet, and enjambment which disguises her underline message. ...read more.

Imagery is used in the scene were a vivid description of the scheme of the witches plan is described "there hangs a vap'rous drop profound; I'll catch it ere it come to ground;" Hecate intends to lead Macbeth to his doom and distraction by magic spells which will conjure up powerful apparitions that will be able to lead Macbeth to his ultimate doom. As a result Macbeth will defy fate and death and will ignore all warnings of wisdom and fear of consequences "security is mortals' chiefest enemy", Hecate says that overconfidence is the greatest enemy of man as by depriving of his own wisdom and making him complacent, it sends him to the path of ruin and destruction. These captivating lines encapsulates the fascinating rituals of which craft ...read more.