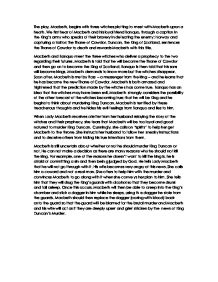 Macbeth: Act 7. When Lady Macbeth receives a letter from her husband relaying the story of the witches and their prophecy, she fears that Macbeth will be too loyal and good natured to murder King Duncan.

The play, Macbeth, begins with three witches plotting to meet with Macbeth upon a heath. We first hear of Macbeth and his loyal friend Banquo, through a caption in the King's army who speaks of their bravery in defeating the enemy: Norway and capturing a traitor: the Thane of Cawdor. Duncan, the King of Scotland, sentences the Thane of Cawdor to death and rewards Macbeth with this title. Macbeth and Banquo meet the three witches who deliver a prophecy to the two regarding their futures. Macbeth is told that he will become the Thane of Cawdor and then go on to become the King of Scotland. ...read more.

Macbeth strongly considers the possibility of the other forecast of the witches becoming true: that he will be King and he begins to think about murdering King Duncan. Macbeth is terrified by these treacherous thoughts and he hides his evil feelings from Banquo and lies to him. When Lady Macbeth receives a letter from her husband relaying the story of the witches and their prophecy, she fears that Macbeth will be too loyal and good natured to murder King Duncan. Cunningly, she calls on "spirits" to help her get Macbeth to the throne. She instructs her husband to follow her sneaky instructions and to deceive others from hiding his true intentions from them. ...read more.

She calls him a coward and not a real man. She offers to help him with the murder and convinces Macbeth to go along with it when she conveys her plan to him. She tells him that they will drug the King's guards with alcohol so that they become drunk and fall asleep. Once this occurs, Macbeth will then be able to creep into the King's chamber and stick a dagger in him while he sleeps, using the dagger he stole from the guards. Macbeth should then replace the dagger (oozing with blood) back onto the guard so that the guard will be blamed for the brutal murder and Macbeth and his wife will act as if they are deeply upset and grief stricken by the news of King Duncan's Murder. ...read more.