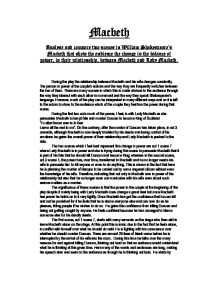 Macbeth: Analyse and compare two scenes in William Shakespeare's Macbeth that show the audience the change in the balance of power, in their relationship, between Macbeth and Lady Macbeth.

Macbeth Analyse and compare two scenes in William Shakespeare's Macbeth that show the audience the change in the balance of power, in their relationship, between Macbeth and Lady Macbeth. During the play the relationship between Macbeth and his wife changes constantly. The person in power of the couple's actions and the way they are frequently switches between the two of them. There are many scenes in which this is made obvious to the audience through the way they interact with each other in movement and the way they speak Shakespeare's language. However, much of the play can be interpreted in many different ways and so it is left to the actors to show to the audience which of the couple they feel has the power during that scene. During the first two acts much of the power, I feel, is with Lady Macbeth as she persuades Macbeth to tempt fate and murder Duncan to become King of Scotland "To alter favour ever is to fear Leave all the rest to me". On the contrary, after the murder of Duncan has taken place, in act 3 onwards, although Macbeth is now deeply troubled by his deeds and losing control of his emotions he gains the overall power of their relationship and Lady Macbeth is pushed to the side. The two scenes which I feel best represent this change in power are act 1 scene 7 where Lady Macbeth is in power and she is trying during this scene to persuade Macbeth that it is part of his fate that he should kill Duncan and become King; whereas in the second scene, act 3 scene 1, the power has, over time, transferred to Macbeth and he no longer needs his wife to persuade him to kill anyone or even to do anything. This is shown in the fact that here he is planning the murder of Banquo to be carried out by some angered citizen without even the knowledge of his wife. ...read more.

The next section of her speech contains alliteration "Will I with wine and wassail so convince" She plans to get the guards of Duncan drunk and after than she will overpower them. Then this will leave Duncan unguarded and free to their attacks. "His spongy officers, who shall bear the guilt" They then plan to blame the murder on the guards due to the fact that they will be unable to remember their actions from this time. Here for the first time the action they are about to commit is referred to at last as murder "quell". This shows that she is not in fear of this act, or at least that she will not show this fear to Macbeth. After his wife's great speech Macbeth has no choice but to agree to carry out the murder. He will be a man and he will show her that he can carry out any thing she wants him to. "For thy undaunted mettle should compose Nothing but males. Will it not be received, When we have marked the blood those sleepy two Of his own chamber and used their very daggers, That they have done't?" Here he adds to the plan; he will use the guards' daggers and smear them with Duncan's blood. This way no one can blame anyone but the drunken guards. He no longer now needs to worry about being caught doing this, he feels the plan is safe. At this point the audience are unsure whether Lady Macbeth had already come up with this part of the plan and just does not tell him. If this were true it would be used so that Macbeth feels it is partly his own work. Albeit she still says nothing but agrees with him and adds that they must seem sad upon his death. Macbeth understands this and says that he shall act sad after the death. ...read more.

Some of which are obvious in the scenes that I have analysed and others that are only shown in other parts of the play. There is the deception of people by Macbeth and Lady Macbeth. This is shown here in the second scene when Macbeth tells the men that it was Banquo to blame for their lives going wrong when in fact it was himself. Also shown when Macbeth tells Banquo and everyone else that it was Malcolm and Donaldbain that killed their father. There is also the theme of guilt as shown by blood, none of this is shown in my chosen scenes by much of it is shown by Lady Macbeth later in the play in the scene where she has her nightmare. Here she is seen by the audience to be seemingly trying to wash immovable blood from her hands. Another main theme in this play is the workings of the supernatural and their influences into Macbeth's life. Again none of this is shown in the two chosen scenes but it very prominent in Macbeth's choices about his actions. By part way into the play Macbeth believes all of what the Witches say and so as they say "for none of woman born Shall harm Macbeth" Macbeth is lead to believe that no one can harm him so he feels he has no need to protect himself. This later gets him into great danger. In conclusion despite there being many other themes in this play in my chosen scenes the one of power stands out a great deal. They show well how Lady Macbeth has the majority of power during the beginning of the play but as it continues she loses it quickly to Macbeth. He seems to gain the power of the country around the same time that he gains it over the relationship, however because the switch in power of the relationship is not as obvious as the switch in power of the country we are unable to determine which followed which. Laura Mann 10E ...read more.