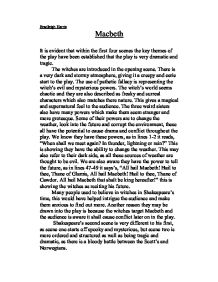 Bradleigh Harris Macbeth It is evident that within the first four scenes the key themes of the play have been established that the play is very dramatic and tragic. The witches are introduced in the opening scene. There is a very dark and stormy atmosphere, giving it a creepy and eerie start to the play. The use of pathetic fallacy is representing the witch's evil and mysterious powers. The witch's world seems chaotic and they are also described as freaky and surreal characters which also matches there nature. This gives a magical and supernatural feel to the audience. The three weird sisters also have many powers which make them seem stranger and more grotesque. Some of their powers are to change the weather, look into the future and corrupt the environment, these all have the potential to cause drama and conflict throughout the play. We know they have these powers, as in lines 1-2 it reads, "When shall we meet again? In thunder, lightning or rain?" This is showing they have the ability to change the weather. This may also refer to their dark side, as all these sources of weather are thought to be evil. We are also aware they have the power to tell the future, as in lines 47-49 it says's, "All hail Macbeth! Hail to thee, Thane of Glamis, All hail Macbeth! Hail to thee, Thane of Cawdor. All hail Macbeth that shalt be king hereafter!" this is showing the witches as reciting his future. Many people used to believe in witches in Shakespeare's time, this would have helped intrigue the audience and make them anxious to find out more. ...read more.

He kept having murderous plots over killing King Duncan. This is a dramatic device. Within the later scenes of the play, his evil side shall take over and he is driven to murdering King Duncan. Macbeth and Banquo decide it would be best to leave it to chance, as chance is what made the witches target Macbeth and shall decide his fate to be king. The fourth scene begins with King Duncan reporting that Thane of Cawdor has been executed, due to betraying his country. He goes on to thank Macbeth and Banquo for their heroism in the battle. King Duncan continued to announce that Malcolm shall be The Prince of Cumberland, for his nobility and loyalty. As in lines 37-42 it say's, "We will establish our estate upon our eldest, Malcolm, whom we name hereafter The Prince of Cumberland, which honour must not unaccompanied invest him only, but signs of nobleness, like stars, shall shine on all deservers." This show he was honoured and respected by many however, he may have been favoured over others to be appointed The Prince of Cumberland, as he is King Duncan's son, so therefore he could have been biased. Macbeth congratulates Malcolm, but I believe is deeply upset, as he now stands between Macbeth and the crown. Plans are then made for King Duncan to dine at Macbeth's castle. I believe the reason for this is because Macbeth may be getting ready to murder King Duncan and if his last meal was with Macbeth and they were seen having a joke, he would be an unlikely suspect. ...read more.

In some aspect I believe Macbeth is a coward. After murdering Banquo, Macbeth turned mad and got haunted by Banquo's ghost. This was a great turn in the play as Macbeth was once a very powerful man. The next tragedy was when Lady Macbeth committed suicide due to the guilt. Macbeth was then confronted by the three witches once again and told him to beware Macduff. So therefore he believed he should get him killed also. Unfortunately, he was said to have ran away to England where Malcolm and Donalbain hid. The reason for this is as they were going to try and defeat Macbeth, so therefore further drama and conflict would be caused. As Macbeth could not have Macduff executed, he decided to get the closest thing to him so therefore killed his wife and kids. At this point I believe he thought he wish he had never over come the king as he would not have been in this situation. Macduff and Malcolm then gathered up an army and went to Macbeth's castle in order to kill him. Once they arrived there was a battle between Macbeth and young Siward. Macbeth ended up defeating him after a long sword fight. After doing so there was then a final battle between Macduff and Macbeth. Macduff however won. This was once again a great tragedy as Macbeth was once a well respected and loyal man but throughout the play was hated by many due to the decisions he made. This shows that power and fame could change somebody because if the witches had never told him he would become king, many deaths would have been prevented, however, once the witches had told him, the ending was inevitable. ...read more.