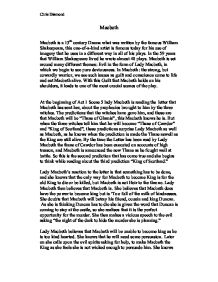 Macbeth Macbeth is a 15th century Drama what was written by the famous William Shakespeare, this one-of-a-kind artist is famous today for his use of imagery that he uses in a different way in all of his plays. In the 59 years that William Shakespeare lived he wrote almost 40 plays. Macbeth is set around many different themes: Evil in the form of Lady Macbeth, in which we begin to see pure deviousness. In Macbeth: the strong, but cowardly warrior, we see such issues as guilt and conscience come to life and eat Macbeth alive. With this Guilt that Macbeth holds on his shoulders, it leads to one of the most crucial scenes of the play. At the beginning of Act 1 Scene 5 lady Macbeth is reading the letter that Macbeth has sent her, about the prophecies brought to him by the three witches. The predictions that the witches have gave him, and these are that Macbeth will be "Thane of Glamis", this Macbeth knows he is. But when the three witches tell him that he will become "Thane of Cawdor" and "King of Scotland", these predictions surprise Lady Macbeth as well as Macbeth, as he knows when the prediction is made the Thane aswell as the King are still alive. ...read more.

Lady Macbeth uses strong imagery in her soliloquy when calling upon the evil spirits. She asks "Unsex me here and fill me from the crown to the toe top full of direst cruelty" which makes us believe that she does not want to be a woman any more and wants to be filled with cruelty. She also asks of the spirits to "Stop up th'access and passage to remorse" so she does not feel guilty for any actions that she may be responsible for. Another use of imagery is when Lady Macbeth personifies the Death as the Raven: "The Raven is hoarse." Darkness is used in her soliloquy when she asks for the night to be dark and to cover the murder. When she calls upon the Evil dark spirits it reminds us to the supernatural and the supernatural confrontation that Macbeth made with the three witches. Lady Macbeth goes on to greet her fate "King Duncan" in to there home and then has a convosation with her husband. She believes that people may suspect that something is wrong jus by looking at Macbeth so she tells him "Look like th'innocent flower, but be the serpent under't." ...read more.

Lady Macbeth realised that he Macbeth had the potential to kill, but it was the persuasion that was the hardest part. It seems as if Macbeth is scared of his wife and is doing it just to please her but at the end of the scene we can se a big difference as we can tell how adamant and persistent he is on killing his friend and ruler. The three witches set the start of the play if they hadn't of made the 3 prophecies for Macbeth, the witches only stated fact and lady Macbeth helped to persuade him if she hadn't of persuaded him there would have been no chance of King Duncan being murdered. Macbeth require only a little bit persuasion as he is a born warrior, so killing is one of his talents, as this is how he become the Thane of Cawdor by being a strong warrior. So we know he was ready and could kill, but all it was is that he didn't have a sufficient purpose to kill him, maybe if the king had been more malicious towards him but the kind so compassionate towards him, he kin of felt that King Duncan was a fatherly figure. ?? ?? ?? ?? Chris Diamond ...read more.