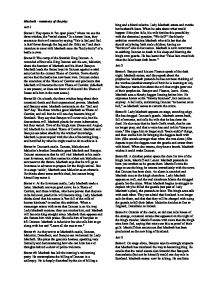 Macbeth - summary of the play.

Macbeth - summary of the play Act 1 Scene i: Play opens in "an open place," where we see the three witches, the "weird sisters." In a dozen lines, they announce their evil nature by saying "Fair is foul,and foul is fair/Hover through the fog and the filthy air," and their intention to meet with Macbeth once the "hurly-burly" of a battle is over. Scene ii: The camp of the Scottish King Duncan. A wounded officer tells King Duncan and his son, Malcolm, about the heroism of Macbeth and his friend Banquo. Macbeth leads the forces loyal to Duncan against a rebel army led by the current Thane of Cawdor. News shortly arrives that the battle has now been won. Duncan orders the execution of the Thane of Cawdor and proclaims that Macbeth will become the new Thane of Cawdor. (Macbeth is not present, so does not know of this until the Thane of Rosse tells him in the next scene.) Scene iii: On a heath, the three witches brag about their unnatural deeds and their supernatural powers. Macbeth and Banquo enter. Macbeth comments on the "foul and fair" day. The three witches greet Macbeth as Thane of Cawdor, and tell him he will one day become king of Scotland. ...read more.

The king's sons talk with each other. They are afraid that Scotland is no longer safe for them, and that that they will be charged with using the guards to kill their father. Malcolm decides to flee to England, Donalbain to Ireland. Scene iv: Outside of the castle, an old man tells Rosse of the strange, unnatural omens that appeared on the night of the king's murder. Macduff enters with news that the king's sons have fled, saying that many see this as proof of their guilt. Macduff then announces that Macbeth has been proclaimed as the new king of Scotland. Act 3 Scene i: On stage alone, Banquo says he strongly suspects that Macbeth has murdered his way to becoming king. He recalls that the weird sisters also foretold that Banquo's descendants (but not he himself) would one day rule in Scotland. Macbeth enters: now he is king. He confirms that Banquo and Fleance plan to go horseback riding. All except Macbeth and his servants exit. Macbeth speaks of a scheme to have Banquo and Fleance killed, to prevent this part of the witches' prophecy from coming true. By lying about Banquo, he persuades two soldiers to murder Banquo and Fleance as they ride. ...read more.

Scene v: At his castle, Macbeth is told that his wife, Lady Macbeth, is dead. Macbeth is stunned, saying that life "is a tale/Told by an idiot, full of sound and fury/Signifying nothing." Just then, a messenger arrives with the word that Birnam Wood is "marching" on Dunsinane. Macbeth realizes what this means in terms of the prophecies, but vows to fight on, still reassured that no man born of woman can kill him. Scene vi: Malcolm, Macduff and a lord of their party, Siward, prepare to assault Macbeth's castle. Scene vii: Macbeth appears in armour and kills Siward. He encounters Macduff and the two duel throughout the remainder of the scene. Scene viii: As the fight between them continues, Macduff tells Macbeth that he is not a "natural" product of his mother's womb, that he was prematurely ripped from it and (technically) is "not of woman born." Macbeth faces the challenge bravely, telling his foe to "Lay on, Macduff." Macduff and they leave the stage, fighting. Macduff appears carrying Macbeth's severed head and hails Malcolm as the new king of Scotland. Malcolm says that when he is crowned, he will make Macduff and his supporters not Thanes but Earls as they all celebrate the triumph over Macbeth, Lady Macbeth and the evil that they wrought in Scotland. ...read more.