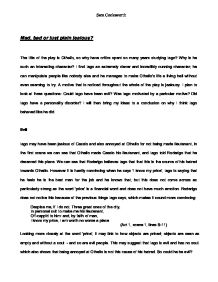 Mad, bad or just plain jealous? The title of the play is Othello, so why have critics spent so many years studying Iago? Why is he such an interesting character? I find Iago an extremely clever and incredibly cunning character; he can manipulate people like nobody else and he manages to make Othello's life a living hell without even seeming to try. A motive that is noticed throughout the whole of the play is jealousy. I plan to look at three questions: Could Iago have been evil? Was Iago motivated by a paricular motive? Did Iago have a personality disorder? I will then bring my ideas to a conclusion on why I think Iago behaved like he did. Evil Iago may have been jealous of Cassio and also annoyed at Othello for not being made lieutenant, in the first scene we can see that Othello made Cassio his lieutenant, and Iago told Roderigo that he deserved this place. We can see that Roderigo believes Iago that that this is the source of his hatred towards Othello. However it is hardly convincing when he says 'I know my price', Iago is saying that he feels he is the best man for the job and he knows that, but this does not come across as particularly strong as the word 'price' is a financial word and does not have much emotion. Roderigo does not notice this because of the previous things Iago says, which makes it sound more convincing: Despise me, if I do not. Three great ones of the city, In personal suit to make me his lieutenant, Off-capp'd to him: and, by faith of man, I know my price, I am worth no worse a place. (Act 1, scene 1, lines 8-11) Looking more closely at the word 'price', it may link to how objects are priced; objects are seen as empty and without a soul - and so are evil people. This may suggest that Iago is evil and has no soul. ...read more.

Another thing that Iago says to show this is 'twixt my sheets/ He's done my office' so again here is suggesting that Othello had sex with his wife. The word office seems to drain the emotion out of the phrase and makes it seem like Iago does not really care, as it is associated with a function or a service. So he is trying to cover up his real emotion and he says: For I do suspect that lusty Moor Hath leap'd into my seat; the thought whereof Doth, like a poisonous mineral, gnaw my inwards; (Act 2, scene 1) I think in the quote his real emotions start to show through and he tells of how his something is gnawing at him - this is the first and only physical description of Iago's emotions and how he is feeling - he is describing how he must get revenge on Othello or this anger and pain will not stop eating him inside. It is quite a physical and disgusting image - something eating at your inwards, but it is also a phrase that links to having something on your mind or some form of jealousy. He does not use the word 'bite', because he is describing this perpetual and continuous feeling that will not stop until revenge has been done on Othello. Also 'gnaw' is a word that is associated with vermin - and vermin is something that you want to get rid of - which could be showing Iago's desire to get revenge. Also gnaw being associated with rats, and the fact that rats carried the plague, could also be showing this horrible disease that is inside of him. In the next few lines Iago goes on to explain how he wants to get rid of this feeling and getting revenge on Othello. Iago managed to think his way out of his jealousy but he then wants to put Othello into 'A jealousy so strong that judgement cannot cure' judgement means reasoning and thinking, so he is saying that thinking will not be able to cure it. ...read more.

her this shows he has no regard for the safety of others not even his wife but will go to any means necessary for the safety of himself. The next symptom Iago certainly does not have, it is: Impulsivity or failure to plan ahead. Iago certainly does plan ahead and does it well we can see in Act 2 Scene 3 he describes his plan as a carefully woven net, "out of her own goodness make the net that shall enmesh them all ". I think Iago is able to keep himself calm in public and around Othello and is not irritable or aggressiveness unlike Roderigo who does have many physical fights, and Iago thinks before he takes action. He does stab Cassio in the leg but this was not aggressive but more premeditated. But then again when his plan does not go accordingly and he is put under pressure when Emilia may reveal his plan, he stabs her - this was not planned and more of an instinct - to keep himself from being revealed. Another symptom of antisocial personality disorder is lack of remorse. Iago does not show any signs of remorse after murdering his wife or ruining Othello's life - it doesn't really seem like a big deal to him. Iago does show many of the symptoms of antisocial personality disorder. One that he does not show is the failure to plan ahead, but I think that this was because of how clever Iago is. I have gone into more detail in my conclusion below. Conclusion I have looked into a variety of different reasons for Iago's behaviour. Originally I thought that Iago had an initial motivation of anger toward Othello which then became an attractive control of him reflecting evil nature and antisocial behaviour. But looking at the quote 'I know my price' in more detail - saying how price has no emotion, therefore it is not his real motive makes me think that there is a different explanation. I think that a lot of his behaviour did reflect Antisocial personality disorder but Sam Cocksworth ...read more.