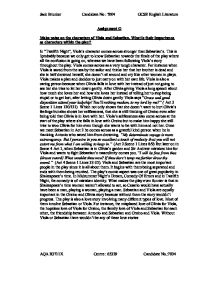 Make notes on the characters of Viola and Sebastian. What is their importance as characters within the play? In &quot;Twelfth Night&quot;, Viola's character comes across stronger than Sebastian's

Assignment G Make notes on the characters of Viola and Sebastian. What is their importance as characters within the play? In "Twelfth Night", Viola's character comes across stronger than Sebastian's. This is 1probably because we only get to know Sebastian towards the finale of the play where all the confusion is going on, whereas we have been following Viola's story throughout the play. Viola comes across as a very tough character. For instance when Viola is saved from the sea by the sailor and thinks her that her brother is dead and she is half drowned herself, she doesn't sit around and cry like other women in plays. Viola makes a plan and decides to just carry on with her own life. Viola is also a caring person because when Olivia falls in love with her instead of just not going to see her she tries to let her down gently. After Olivia giving Viola a long speech about how much she loves her and how she loves her instead of telling her to stop being stupid or to get lost, after letting Olivia down gently Viola says "Grace and good disposition attend your ladyship! You'll nothing madam, to my lord by me?" (Act 3 Scene 1 Lines 120/121) Which not only shows that she doesn't want to hurt Olivia's feelings but also shows her selflessness, that she is still thinking of Orsino even after being told that Olivia is in love with her. ...read more.

Is it a world to hide virtues in? I did think by the excellent constitution of thy leg, it was formed under the star of galliard." Sir Andrew Aguecheek Sir Andrew is a tall thin and very stupid knight. He is staying at Olivia's house at the invitation of Sir Toby Belch. He is rich and Sir Toby encourages him to keep wooing the unwooable Olivia so that he will finance their regular drinking sessions. Sir Andrew Aguecheek is foolish and easily tricked. He does not realize that he has been cheated. Sir Andrew only stays because Sir Toby keeps telling him that Olivia is considering him as a possible suitor. In addition, he is a coward. For example when Sebastian stands up to him he backs down very quickly. A good deal of the humour surrounding him comes from how he is tricked. Orsino The Duke Duke Orsino's opening speech in Act 1 tells us something about his character and mood. He is in love but this doesn't bring him happiness, rather a profound melancholy. His speech turns to images of disease and death. "excess...surfeiting...sicken...die...dying" (lines 2/4) and it is clear that Orsino is not an active lover focused on his beloved. He is preoccupied with the sensation of love itself, feeing his emotions with music an elaborate poetic images. Orsino has probably seen Olivia only once and her image as insipid him in a kind of romantic indulgence. ...read more.