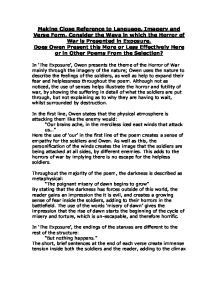 Making Close Reference to Language, Imagery and Verse Form, Consider the Ways in which the Horror of War is Presented in Exposure.

Making Close Reference to Language, Imagery and Verse Form, Consider the Ways in which the Horror of War is Presented in Exposure. Does Owen Present this More or Less Effectively Here or in Other Poems From the Selection? In 'The Exposure', Owen presents the theme of the Horror of War mainly through the imagery of the nature; Owen uses the nature to describe the feelings of the soldiers, as well as help to expand their fear and helplessness throughout the poem. Although not as noticed, the use of senses helps illustrate the horror and futility of war, by showing the suffering in detail of what the soldiers are put through, but not explaining as to why they are having to wait, whilst surrounded by destruction. In the first line, Owen states that the physical atmosphere is attacking them like the enemy would: "Our brains ache, in the merciless iced east winds that attack us..." ...read more.

In 'The Exposure', the endings of the stanzas are different to the rest of the structure: "But nothing happens." The short, brief sentences at the end of each verse create immense tension inside both the soldiers and the reader, adding to the climax of the war. The words also show the war is dull, and slowly the emptiness eats away at the soldiers, creating more fear and horror left in them. The second half of 'The Exposure' describes that the soldiers appear to enter a dream-like state: "We cringe in holes, back on forgotten dreams, and stare, snow-dazed," Here Owen shows through the imagery and language that the soldiers are suffering so much that the negative atmosphere engulfs them, causing the horrors of war to create a wild sense of insanity in the soldiers. The use of the words 'we cringe in holes' shows that the exposure of the war is adding to the horrors, and killing them more quickly than the weapons. ...read more.

In the fourth verse, Owen states that the bullets fired by the enemy are less deadly than the air surrounding them: "Sudden successive flights of bullets streak the silence. Less deadly than the air that shudders black with snow," The language in the quote states that the eerie silence and the atmosphere creates a deeper sense of fear than the thought of being hit by the bullet. For the atmosphere to bring to soldiers closer to death than the bullets, the horrors of war must cause the soldiers the feel trapped and constantly worried. Overall, because of the overuse of imagery and the attitudes of suffering shown in the language of the soldiers, Owen shows the horrors of war more effectively in The Exposure to the other of his poems. By showing that the weather and atmosphere are eating away at them, and their passive response reflects their vulnerability and innocence, we see the suffering of the young men in its full form in the war. ...read more.

There are some good points made here and paragraphs are generally clearly written, using a Point, Evidence, Explain structure. The first part of the question is adhered to throughout. However, much of the analysis is not really developed and there is not enough detailed exploration of poetic devices used and their effects. Owen is particularly experimental with use of sounds in his poems, and this is not considered. Neither is the rhyme scheme (consider use of para-rhyme) and rhythm. The second part of the question is ignored until a brief mention in the final paragraph. It would be best not to include this in the question at all. It is also important to be accurate with poetry titles. 'Exposure', not 'The Exposure'.