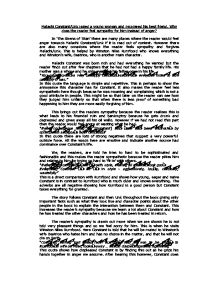 Malachi Constant/Unk raped a young woman and murdered his best friend. Why does the reader feel sympathy for him instead of anger?

Malachi Constant/Unk raped a young woman and murdered his best friend. Why does the reader feel sympathy for him instead of anger? In 'The Sirens of Titan' there are many places where the reader would feel anger towards Malachi Constant/Unk if it is read out of context. However there are also many occasions where the reader feels sympathy and forgives Malachi/Unk. This is helped by Winston Niles Rumfoord who knows everything and Winston's wife, Beatrice, who is another main character. Malachi Constant was born rich and had everything he wanted but the reader finds out after few chapters that he had not had a happy family life. His mother was a whore and he only ever met his father once in his life. "You said you had a very unhappy childhood and made everyone listen to how unhappy it was." In this quote the language is simple and repetitive. This is perhaps to show the annoyance this character has for Constant. It also makes the reader feel less sympathetic here though because he was moaning and complaining which is not a good attribute in people. This might be so that later on the reader can see how they judged him unfairly so that when there is less proof of something bad happening to him they are more easily forgiving of him. This brings out the readers sympathy because the reader realises this is what leads to his financial ruin and bankruptcy because he gets drunk and depressed and gives away all his oil wells. ...read more.

This makes the reader feel sorry for Unk which adds to the sympathy the reader feels. When Unk hesitates the antenna makes him feel excruciating pain. This is what makes us feel most sympathy for Unk The reader feels sympathetic when Unk finds out he has a mate and child so when he gets the chance he runs away to find them and to convince them to escape with him to a better place. However, his child, Chrono, tells him that what he is saying is nonsense and that he doesn't need him and his mate, Beatrice Rumfoord, almost lets him die. "Her diagnosis had been correct. He would keel over at any minute." The language here is simple and informal making it sound almost childish which is how we are meant to perceive Beatrice here. This is also sympathy inducing because his family from childhood was been bad and now it is getting worse. The reader feels sympathy instead of anger because of the emphasis on what happened before and how it changed him for worse afterwards When Unk recovers from his meeting with Beatrice and he is forced to talk with Winston again. Winston tells Unk a story about how a man is told repeatedly that a woman behind clothed doors is the most beautiful in the world and how she would turn anyone but the most professional soldiers 'bad'. ...read more.

Unk's mate, Beatrice, and his son, Chrono, are sent with Unk to Titan and when they get there Chrono goes mad. This causes the very strong bond between Chrono and Beatrice to be broken and Chrono goes to live with wild birds. Unk feels bad for having been the cause of this and does try his hardest to make up for everything. "He liked to show off his skills as a provider [to Beatrice]" This time, Beatrice and Unk do get closer however they are still no more than friends. This makes the reader happy for them but also slightly sympathetic to Unk because he is always feeling guilty and has still not really got a good chance to love someone or have a normal life. Another reason the reader feels sympathy is when Unk does try and be a good father and make up with his son. When Unk finds his son's 'shrines' on Titan he does tidy them up and make them look less neglected. "When Constant found one of his strange son's shrines in a state of neglect, he would tidy it up" The reader feels sympathy here because we can see his is trying and fighting a losing battle. On the whole we feel sympathy for Malachi Constant/Unk because of all the bad things that have happened and how that appeals to the reader's feelings as every human feel sorry for a man who has been through so much in such a small amount of time. Helen Young ...read more.