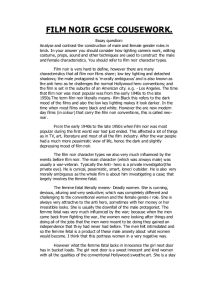 FILM NOIR GCSE COUSEWORK. Essay question: Analyse and contrast the construction of male and female gender roles in brick. In your answer you should consider how lighting camera work, editing costume, props, sound and other techniques are used to construct the male and female characteristics. You should refer to film noir character types. Film noir is very hard to define, however there are many characteristics that all film noir films share; low key lighting and detached shadows; the male protagonist is 'morally ambiguous' and is also known as the anti hero as he challenges the normal Hollywood hero conventions; and the film is set in the suburbs of an American city. e.g. - Los Angeles. The time that film noir was most popular was from the early 1940s to the late 1950s.The term film noir literally means- film Black this refers to the dark mood of the films and also the low key lighting makes it look darker. In the time when most films were black and white. However the are new modern day films (in colour) that carry the film noir conventions, this is called neo-noir. From the early 1940s to the late 1950s when film noir was most popular during the first world war had just ended. This affected a lot of things as in TV, art, literature and most of all the film industry. ...read more.

She especially manipulates all the men around her;tug, pin and brad. Even though she tries her utmost to manipulate Brendan as well and she almost does, but in the end he does see past her. Kara is like laura in many ways; as she manipulates the people around her to get what she wants. I think that this has very much to do with the time that is was made; Back then women couldn't do anything for themselves because of their gender roles. They had no power in society/government/business; they were told that the way they should behave is to stay at home and be a good wife. I think that many women accepted this for a long time. However after the war (as I said before) they had this new found independence. They waned more from life and wanted to be their own person as they had done during the war; but the gender roles were still there. So they had to manipulate the men into doing what they wanted because that was the only way to get it. However these femme fatal's are a very exaggerated versions of the truth. They fears of how women would become if they had this independence. So this reflects male anxieties of the directors. In my opinion, I think that film noir portrays females in a negative way because there are only two types of women femme fatal and girl next door, Kara, Laura and Emily. ...read more.

We never see him look like this with anyone else in the whole film. Not with Kara, Laura, the Pin or even his friend Brain. Though even though Emily is meant to be the most innocent out of all the girls, she is still not that innocent. In the end we find out the she has been involved in drugs, slept with Brendan (while they were in a relationship); Dode (after dumping Brendan) and Tug (while she was with Dode). Which takes me back to my point before, that the women in this film are portrayed in a negative light. I think that Emily is not the typical innocent teenager but a lot of modern day teenagers can relate to her, because at the end of the day she just got caught up in the wrong crowd. Which makes that part high modality. However, I don't think that she would be classed as typical film noir character. In conclusion I think that there is a large contrast between the male and female gender roles in Brick. Even though it does engage very well with the film noir character types Brick does differ to it slightly. I think that because it is low modality it makes it engage with film noir; like the way the use old fashion phones and talk the way that people spoke in traditional film noir. Although I do think that it does portray women in a negative light, I can see where these ideas originated from. ...read more.