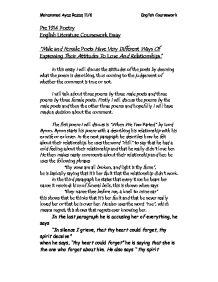 &quot;Male and Female Poets Have Very Different Ways Of Expressing Their Attitudes To Love And Relationships&quot;.

Pre 1914 Poetry English Literature Coursework Essay "Male and Female Poets Have Very Different Ways Of Expressing Their Attitudes To Love And Relationships" In this essay I will discuss the attitudes of the poets by deeming what the poem is describing, thus coming to the judgement of whether the comment is true or not. I will talk about three poems by three male poets and three poems by three female poets. Firstly I will discuss the poems by the male poets and then the other three poems and hopefully I will have made a decision about the comment. The first poem I will discuss is "When We Two Parted" by Lord Byron. Byron starts his poem with a describing his relationship with his ex wife or ex lover. In the next paragraph he describes how he felt about their relationship, he uses the word "chill" to say that he had a cold feeling about their relationship and that he really didn't love her. He then makes nasty comments about their relationship and her; he uses the following phrases "thy vows are all broken, and light is thy fame", he is basically saying that it's her fault that the relationship didn't work. ...read more.

Throughout the poem Robert use nature to describe his love, he uses the words "sea, rose, sun and sands" This shows that he really loves his country. Robert Burns is different from Lord Byron from the sense that Byron is judgmental and he blames others whereas Robert isn't upset about leaving his country. The third and final poem is "La Belle Dame Sans Merci" by John Keats. The poem is based on the painting "La Belle" by the French artist, Roletti. The poem is about John Keats finding a knight who is wounded and who tells John about his encounter with a woman who bewitches him with her beauty. The whole describes the sympathy John has for the knight. The poem is written to show that the woman is the evil person and that the 'brave' knight is easily entranced by her. Although the poem doesn't have that much to do with love and relationships the poem is written to show that in relationships the beauty of a women doesn't always show the personality of a women. ...read more.

This is shown when she says "do you come to me to bend me to your will" this means that do you want me to do all the work while you do nothing. The next paragraph is about when women are worshiped by their lovers; this is shown when she says "whose every deed and word and wish is golden", this means that the woman's lover will do anything for and will over treat her. In the third paragraph it is about women whose lovers only have married them for lust, this is shown when she says " then gratify your clamorous desire" this means that don't expect me to be someone who will satisfy yours desires. The opinions of the poets are that male poets tend to think more about lust than love. They also think that if the relationship doesn't work out then it is the woman's fault. Female poets tend to think more about love than lust, they also think that men only get married because of lust than love and that they are thick headed and that they believe that they are right in everything. Mohammed Ayaz Razaq 11/6 English Coursework ...read more.