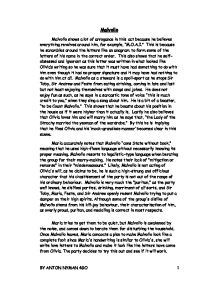 Malvolio Malvolio shows a lot of arrogance in this act because he believes everything revolves around him, for example, "M.O.A.I." This is because he scrambles around the letters like an anagram to form some of the letters of his name in the correct order. This also shows that he self-obsessed and ignorant as this letter was written in what looked like Olivia's writing so he was sure that it must have had something to do with him even though it had no proper signature and it may have had nothing to do with him at all. Malvolio as a steward is a spoil-sport as he stops Sir Toby, Sir Andrew and Feste from eating drinking, coming in late and last but not least enjoying themselves with songs and jokes. He does not enjoy fun as such, as he says in a sarcastic tone of voice "this is much credit to you," when they sing a song about him. He is a bit of a boaster, "to be Count Malvolio." This shows that he boasts about his position in the house as if it were higher than it actually is. Lastly he also believes that Olivia loves him and will marry him as he says that, "the Lady of the Strachy married the yeoman of the wardrobe." ...read more.

When Olivia departs the trick is rendered a success as Malvolio 'hath taken the infection of the device' and fallen for it. The audience is reminded of Malvolio's snobbishness, 'go off, I discard you.' This only encourages the kinsmen and servants pretend they believe he is a lunatic, possessed by the devil, 'bewitched' and attempt to convince Malvolio himself that he is mad, 'defy the devil.' They wind him up and pretend to be concerned by calling him childishly affectionate names like 'chuck' and 'biddy.' Malvolio senses that they are ridiculing him, and getting annoyed he almost stoops to their 'element' by telling them to be proud about all aspects of himself, to such an extent that he is greatly bordering on superciliousness. Overall, with taking into consideration the negative and truly objectionable aspects of Malvolio, it can be seen that he does in fact need to be taught a lesson about the downfalls of his disdainful ways. The fact that he is so totally self-satisfied, means that convincing him of another's love (i.e. Olivia's) is easy to achieve. The letter written by Maria in 'Olivia's' hand refers subliminally to each of Malvolio's character weaknesses and consequently ensures that he is fooled by its meanings. His vanity and value of appearance are both fed by the order to wear: "Yellow stockings...ever cross gartered." ...read more.

This is likely to only make her dislike him more- the point of Maria's plan. The rest of the crew are hiding in the box tree and listening to every word he is saying about them. This does not encourage them to be lenient with Malvolio. After witnessing Malvolio's egoistic fantasies, we can see why he is so easily duped by Maria's letter. Ironically the man who once put down the clown (Feste) is now becoming the clown himself as he reads out coarse puns: "These be her very C's, her U's and her T's; and thus makes her great P's." Malvolio is convinced that Olivia is deeply in love with him but doesn't know how to tell him. In the letter Maria makes Malvolio believe that Olivia is asking him to wear yellow stockings as a sign that he loves her, a style which she in fact detests. Even though these items are not usually included in Malvolio's sombre attire he is desperate to please the countess: "I will be strange, stout, in yellow stockings and cross-gartered, even with the swiftness of putting on. Jove and my stars be praised!" We must remember that Malvolio is still "a Puritan" who does not believe in love and happiness. He therefore convinces himself that it is the work of "Jove" that has brought this occurrence about. 1 1 BY ANTON NYMAN 4GO ...read more.