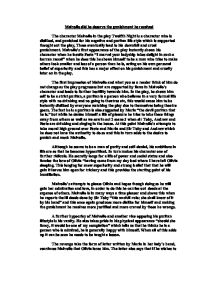 Malvolio did he deserve the punishment he received in the play Twelfth Night?

Malvolio did he deserve the punishment he received The character Malvolio in the play Twelfth Night is a character who is disliked, and punished for his negative and puritan life style which is supported thought out the play, These eventually lead to his downfall and cruel punishment. Malvolio's first appearance of the play instantly shows his character when he insults Feste "I marvel your ladyship takes delight in such a barren rascal" when he does this he shows himself to be a man who tries to make others look smaller and less of a person than he is, acting on his own personal belief of superiority and this has a major effect on his punishment and cruelty later on in the play. The first impression of Malvolio and what you as a reader think of him do not change as the play progresses but are supported by flaws in Malvolio's character and leads to further hostility towards him. In the play, he shows him self to be a strict puritan, a puritan is a person who believes in a very formal life style with no drinking and no going to theatres etc, this would cause him to be instantly disliked by everyone watching the play due to themselves being theatre goers. ...read more.

Malvolio's attempts to please Olivia and hopes though doing so he will gain her admiration and love, in order to do this he carries out deeds at the expense of others. Malvolio is in many ways a time pleaser and shows this when he reports the ill deeds done by Sir Toby "this uncivil rule; she shall know of it by his hand" and this once again produces more dislike for himself and making the punishment he receives more justified and more craved by those he wrongs. A further hypocrisy of Malvolio and another vice opposing his puritan lifestyle is his vanity. He also takes pride in his physical appearance "should she fancy, it would be one of my completion" which tells us that he thinks he is a person who is admired, he is generally happy with himself. When all of this adds up it can be seen he needs to be taught a lesson. The revenge take the form of letter written by Maria in her lady's hand, convinces Malvolio that Olivia loves him. The letter also says that if he wishes to be with Olivia that he is to smile and wear yellow stockings, which ...read more.

that he is insane by twisting his words into those of a lunatic "you speak ill of the devil...how he takes it to heart." The climax of the prank is when Malvolio is locked in a prison and begs for the help of sir topaz the priest (who was impersonated by Feste) at this point Malvolio has lost all sense of human dignity and basic pride while at the hand of such an evil joke. And it becomes clear that the prank is longer amusing, but is becoming sinister and torturous, Sir Toby is the first to see this "I cannot pursue with any safety this sport to the up shot". Malvolio suffers great injustice at the hands of tormentors and is "notoriously abused" beyond the brink of mere teasing, he does not deserve the later treatment and crime was his unliveable character and how he wronged his superiors with words alone, however the experience has not changed Malvolio at all and he now filled resentment for his peers and Olivia also, he departs the play promising to be "revenged on the pack of them" no rewards are gained and no lessons are learned from this unnecessary suffering ...read more.