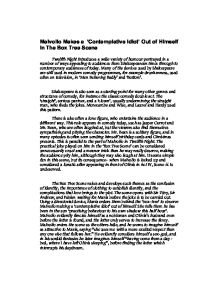 Malvolio Makes a &amp;#145;Contemplative Idiot&amp;#146; Out of Himself in The Box Tree Scene

Malvolio Makes a 'Contemplative Idiot' Out of Himself in The Box Tree Scene Twelfth Night introduces a wide variety of humour portrayed in a number of ways appealing to audiences from Shakespearean times through to contemporary audiences of today. Many of the devices used by Shakespeare are still used in modern comedy programmes, for example drunkenness, used often on television, in 'Men Behaving Badly' and 'Bottom'. Shakespeare is also seen as a starting point for many other genres and structures of comedy, for instance the classic comedy double act. The 'straight', serious partner, and a 'clown', usually undermining the straight man, who feeds the jokes. Morecambe and Wise, and Laurel and Hardy used this pattern. There is also often a lone figure, who entertains the audience in a different way. This role appears in comedy today, such as Jasper Carrot and Mr. Bean, who are often laughed at, but the viewers also find themselves sympathising and pitying the character. Mr. Bean is a solitary figure, and in many episodes is often seen sending himself birthday cards and Christmas presents. This is parallel to the part of Malvolio in Twelfth Night. The practical joke played on him in the 'Box Tree Scene' can be considered unnecessarily cruel and a meaner trick than he may really deserve, making the audience pity him, although they may also laugh at him. It seems simple fun in this scene, but its consequence- when Malvolio is locked up and considered a lunatic after appearing in front of Olivia in Act IV, Scene ii. ...read more.

He doesn't realise that in actual fact that yellow is a colour Olivia despises, and she hates the fashion of cross-gartering- to wear the straps of stockings crossed around his knees. This is a parody of the fashion of the time, mocking it as looking ridiculous, just as today many programmes such as 'French and Saunders' and Harry Enfield often mock modern fashion and crazes. The device of disguise carried here into the sub-plots, is also used in the play's central plot revolving around Viola disguising herself in men's clothes. Clothing and disguise figures heavily into Twelfth Night, as person's identity appears to be sometimes dependent on their clothing, for example in Malvolio's fantasies, and sometimes separate from their clothing as Orsino finds himself becoming increasingly closer to 'Cesario'. Malvolio not only disguises himself on the outside, but at the same time he is asked to disguise his personality by coming before her smiling. Olivia is still in mourning at this stage for her brother and father, thus making his smiles even more out of place and bizarre to her. Maria flatters him in the letter by saying 'thy smiles become thee well'. This personality may be a disguise, although it may also be Malvolio's true character that he has been forced to oppress because of his situation in the house and status in society. The newfound confidence he is given in receiving this letter maybe instead of asking him to change his personality, is really letting him show his true self that he has been hiding behind a front of hostility. ...read more.

The visual devices used in this scene are widely used themes. The main props in this scene are the letter which Malvolio reads from, and the box-tree which is used to hide Toby, Andrew and Fabian. These props are essential to the scene. In some of the versions we saw, the Box Tree is on wheel, so Toby and Andrew can follow Malvolio as he moves around. Malvolio also picks up the letter, reading it and as he walks away he skips waving it in his hands When Malvolio finds the letter he starts reading it aloud letting the audience hear his reactions to his belief that the "unknown beloved" in the letter is actually himself. This device is soliloquy, when a character speaks out loud to the audience or themselves on stage, letting the audience hear his reactions and letting Toby, Andrew and Fabian over hear him while hiding behind the Box Tree, so they can react visually for the audience to his misconception. Malvolio is apparently unaware of their presence, although in some interpretations of this scene, the box-tree is made very obvious, which adds exaggerated comedy to the situation, to give it the feel of a pantomime. Malvolio tends to exclude himself throughout the play, dreaming of superiority, therefore making him an object of ridicule to the audience and other characters. They believe that he makes a 'contemplative idiot' out of himself, but because of his disillusions, to him his fantasies are completely realistic. This further increases the cause for ridicule making Malvolio a funny, but lonely figure. ...read more.