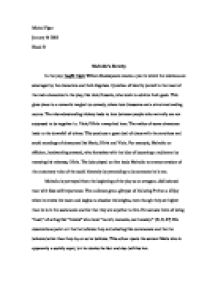 Michel Figot January 16 2003 Block B Malvolio's Identity In the play Twelfth Night, William Shakespeare creates a plot in which the relations are sabotaged by the characters and their disguises. Question of identity prevail in the most of the main characters in the play, like viola/Cesario, who work to achieve their goals. This gives place to a romantic tangled up comedy, where love blossoms and a structured ending occurs. The misunderstanding trickery leads to love between people who naturally are not supposed to be together i.e. Viola/Olivia unrequited love. The malice of some characters leads to the downfall of others. This produces a great deal of chaos with the emotions and social standings of characters like Maria, Olivia and Viola. For example, Malvolio an efficient, hardworking steward, who fantasizes with the idea of becoming a nobleman by marrying his mistress, Olivia. ...read more.

In fact, they dislike and ridicule him terribly by reminding him that he is just a steward. They all see him as a "Puritan," "egoist," and "hypocrite". (All this adjectives are spread throughout the play, showing that his offensive personality is in fact true). Finally "the whole pack" (V, I, 377) plays a practical joke on him to put him in his place where he belongs: a servant. Malvolio demonstrates his loyalty towards Olivia. The idea of marrying her, being a count and being very wealthy was just a dream that he never reacted to because it seemed very far from his grasp. When he finds the letter, he is completely overwhelmed and convinces himself that this is a very important piece of evidence of his Olivia's love. He gets carried away with his dreams, and starts to take action. This gives place to very humorous dilemmas. ...read more.

He is locked in a dark room and tiring to convince him of being "mad". His dignity is removed away in this sinister way of treating him while captive, and Malvolio becomes desperate while still denying being "mad." After some time in prison, his personality changes he speaks to Feste as an equal. "Good-Fool...I'll requite in the highest degree I prithee. " (IV, ii, 123.) He leaves in the final scene wanting revenge from the kinsmen and servants that played the joke on him. "I'll be reveng'd on the whole pack of you!" (V, I, 377) In this play the problem of social ambition and misplaced love are resolved. Nevertheless Malvolio's aspirations of becoming noble are more unreasonable than Sir Toby's of marring Maria who is socially unworthy. Malvolio finally faces the truth, and realizes that he is socially undeserving of his noble mistress, and departure. The happy "socially justifiable" couples come together and achieve happiness. The social hierarchy that was trued upside down during the play it is set back onto its feet. . 2 ...read more.