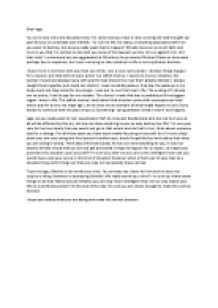 ﻿Dear Iago, You are a very wise and educated man; I?m convinced you have a very cunning and well thought out plan for you to undertake over Othello. To ruin his life, his status, everything associated with him you want to destroy, but do you really want that to happen? Othello has ever so much faith and trust in you that I?m certain he has told you some of his deepest secrets, to turn against him, isn?t that risky? I understand you are aggravated at Othello as he promoted Michael Cassio as lieutenant perhaps due to nepotism, but trust me trying to then destroy his life is not a judicious decision. ...read more.

The ending of it all was not so pretty, I had to pay for my mistake. The choice I made that day is probably still the biggest regret I have in life. The selfish motive I had behind that decision came with consequences that I had to pay for due to my large ego. Let my story be an example of what might happen to you if you decide to continue with this plan of yours. Something I can guarantee is that it won?t end happily. Iago, do you really want to ruin everybody?s life? An innocent Desdemona who has not hurt you at all will be affected by this sin; she has not done anything to you so why destroy her life? ...read more.

I?m sure you didn?t as you are a very intelligent man and you would have used your sense in this kind of situation however when a fresh pair of eyes look at a situation they point things out that you may not necessarily have noticed. Trust me Iago; Othello is not worth your time. You are way too clever for him and he does not suspect a thing. However is destroying Othello?s life really worth your time? I?m sure you have better things to do than follow around Othello; you are way more intelligent than him so why waste your life on a worthless person? At the end of the day I?m sure you are clever enough to make the correct decision I hope you realise what you are doing and make the correct decision ...read more.