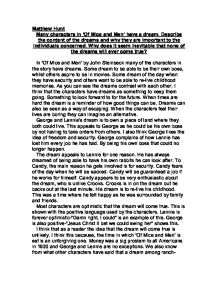 Many characters in 'Of Mice and Men' have a dream. Describe the content of the dreams and why they are important to the individuals concerned. Why does it seem inevitable that none of the dreams will ever come true?

Matthew Hunt Many characters in 'Of Mice and Men' have a dream. Describe the content of the dreams and why they are important to the individuals concerned. Why does it seem inevitable that none of the dreams will ever come true? In 'Of Mice and Men' by John Steinbeck many of the characters in the story have dreams. Some dream to be able to be their own boss, whilst others aspire to be in movies. Some dream of the day when they have security and others want to be able to re-live childhood memories. As you can see the dreams contrast with each other. I think that the characters have dreams as something to keep them going. Something to look forward to for the future. When times are hard the dream is a reminder of how good things can be. Dreams can also be seen as a way of escaping. When the characters feel their lives are boring they can imagine an alternative. George and Lennie's dream is to own a piece of land where they both could live. This appeals to George as he could be his own boss by not having to take orders from others. ...read more.

The dream is mentioned on numerous occasions and the way in which it is written leads us to believe that the idea is to ambitious and will not come true. We could draw comparisons to a fairytale as it is a familiar story to both Lennie and George. "He repeated his words rhythmically" shows it has been said often. Crooks' dream is different to George and Lennie's. In George and Lennie's case they are looking forward to something they have never experienced whereas, Crooks dreams of the past. He dreams to re-live his childhood, this a time when he was most happy. Crooks' childhood would have been much more secure than his current state. Crooks recalls when he would play with the white children and they would get on well. Crooks would like to incorporate his past into his life. He dreams of no longer being lonely and being secure once again. We know that Crooks' dreams for the future could not come true. This is because of the prejudice society he lived in. In the 1930's black people were considered as being inferior they had almost no rights and could not mix with others. We are shown of the attitude to black people when Curley's wife confronts Crooks. ...read more.

I believe that the "movie producer" never wrote back at all. Curley is the only person in 'Of Mice and Men' who has actually achieved his dream. He has became successful at boxing and has got married. Although, Curley is not happy in life. As he has achieved his dream he has no longer anything to hope for. Being good at boxing has made him very aggressive therefore unpopular among those on the ranch. It is Candy how says "Seems like Curley is cockier'n ever since he got married". This shows Curley is also unliked for the fact he now has a wife as it has made him even more confident. In 'Of Mice and Men no matter how much the dreams seem to contrast they all have one similarity-the idea they will come true is unlikely. Almost all the characters face up to the facts at some point and realise there unlikelihood. George allows himself to think realistically as he knows how hard it is to find money. Crooks backs out of the dream realising how ambitious the idea really is. Lennie is the only exception, as always he is unaware. I think that it seems inevitable that none of the dreams come true because all Americans in the 1930's were trapped in a cycle. A cycle of poverty in which there are no real winners. ...read more.