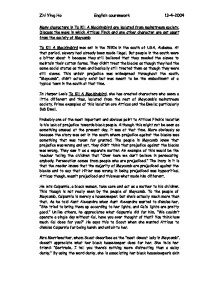 Many characters in To Kill A Mockingbird are isolated from mainstream society. Discuss the ways in which Atticus Finch and one other character are set apart from the society of Maycomb.

Many characters in To Kill A Mockingbird are isolated from mainstream society. Discuss the ways in which Atticus Finch and one other character are set apart from the society of Maycomb To Kill A Mockingbird was set in the 1930s in the south of USA, Alabama. At that period, slavery had already been made illegal. But people in the south were a bitter about it because they still believed that they needed the slaves to maintain their cotton farms. They didn't treat the blacks as though they had the same social status as them and basically still treated them as though they were still slaves. This unfair prejudice was widespread throughout the south. "Maycomb", didn't actually exist but was meant to be the embodiment of a typical town in the south at that time. In Harper Lee's To Kill A Mockingbird, she has created characters who seem a little different and thus, isolated from the rest of Maycomb's mainstream society. Prime examples of this isolation are Atticus and the Ewells; particularly Bob Ewell. Probably one of the most important and obvious point to Atticus Finch's isolation is his lack of prejudice towards black people. Although this might not be seen as something unusual at the present day, it was at that time. More obviously so because the story was set in the south where prejudice against the blacks was something that was taken for granted. The people in Maycomb knew that prejudice was wrong and yet, they didn't think that prejudice against the blacks was wrong. They saw it as a separate matter. An example of this would be the teacher telling the children that "Over here we don't believe in persecuting anybody. Persecution comes from people who are prejudiced." The irony in it is that the reader knows that the majority of Maycomb are prejudiced against the blacks and to say that Hitler was wrong in being prejudiced was hypocritical. ...read more.

As a reader, we don't agree with this as if faced with the same position, we would probably think that they were very wrong to be so prejudiced. Therefore, we admire Atticus's magnanimousness in believing that they could believe in anything they liked. Atticus also looks past people's faults. Although Miss Dubose often hurled abuse at Atticus for defending Tom, he still saw her as a great and brave woman. She wanted to die free of morphine and she did it. Atticus said to Jem: "I wanted you to see what real courage is, instead of getting the idea that courage is a man with a gun in his hand." As readers, we admire the way which Atticus is bringing up his children. Most fathers would categorize "a man with a gun in his hand" as a brave man. Thus the name, "one-shot Finch" given to Atticus in his younger days as a commendation on his shooting skills. Atticus however, teaches his children that there is more than one form of bravery. We also admire the way in which he simplifies complicated matters when he's explaining it to the children. In Scout's words, "Jem and I were accustomed to or father's last-will-and-testament diction, and we were at all times to interrupt Atticus for a translation when it was beyond our understanding." For example, when he told Scout that "You never really understand a person until you consider things from his point of view", and she didn't understand it, he simplified his words to "until you climb into his skin and walk around in it." Maycomb was a place at which tradition was very important. At the start of the story, the author introduced the Finch family by showing the ways by which they were linked to the rest of the Maycomb community. The author helps the reader see how important tradition is to Maycomb by creating the character Aunt Alexandra who was meant to be a typical lady in Maycomb of that time. ...read more.

Bob Ewell's children are also different from the usual children found in Maycomb. They don't seem to have any principle of what is right and wrong ingrained into them at all. One example of this is when Burris Ewell came to school only on the first day of school. "The whole school'd full of 'em. They come first day every year and then leave." Part of the reason he only goes to school on the first day is because he craves attention just like his father. He probably picked up this trait from his father. Part of the reason why Bob Ewell brought the Tom Robinson case to court because "he thought he would be a hero". Bob Ewell's attitude towards bringing up his children was also very different. He didn't really care about the welfare of his children. "It was everyone for himself as far as keeping clean went: if you wanted to wash you hauled your own water; the younger children had perpetual colds and suffered from chronic ground-itch" Although both Bob Ewell and Atticus Finch were both isolated from the mainstream society, they were isolated in very different ways. Atticus was isolated because he followed what he believed in; but Bob Ewell was isolated because of his conduct and behaviour towards people in general. The reason why Harper Lee created these characters might perhaps, have to do with the social standings of these two men. With Atticus at the top and Bob Ewell at the bottom of the social ladder, the reader then can see the different ways in society isolates various people. Harper lee might have also wanted to create a contrast for the reader. Bob Ewell's isolation is one where the reader is meant to look upon as something he deserves, while Atticus's isolation is not meant to be seen as something which is difficult to live with as its self imposed and doesn't bother him much. Zhi Ying Ho English coursework 13-4-2004 ...read more.