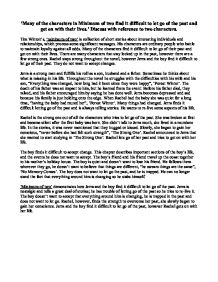 'Many of the characters in Minimum of two find it difficult to let go of the past and get on with their lives.' Discuss with reference to two characters.

Jerra becomes depressed and sad because his family is just holding onto the edge. When Rachel had the baby she was quiet for a long time, "having the baby had muted her", 'Forest Winter'. Many things had changed. Jerra finds it difficult letting go of the past and is always telling stories. He wants to re-live some aspects of his life. Rachel is the strong one out of all the characters who tries to let go of the past. She was broken at first and became silent after the first baby was born. She didn't talk to Jerra much, she lived in a mundane life. In the stories, it was never mentioned that they hugged or kissed. ...read more.