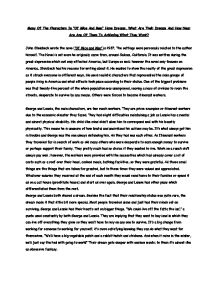 Many Of The Characters In Of Mice And Men Have Dreams. What Are Their Dreams And How Near Are Any Of Them To Achieving What They Want?

Many Of The Characters In "Of Mice And Men" Have Dreams. What Are Their Dreams And How Near Are Any Of Them To Achieving What They Want? John Steinbeck wrote the novel "Of Mice and Men" in 1937. The settings were personally related to the author himself. The Novel is set were he originally came from, around Salinas, California. It was written during the great depression which not only effected America, but Europe as well; however the novel only focuses on America. Steinbeck had his reasons for writing about it. He wanted to show the reality of the great depression as it struck everyone in different ways. He used realistic characters that represented the main groups of people living in America and what effects took place according to their status. One of the biggest problems was that twenty-five percent of the whole population was unemployed, leaving a mass of civilians to roam the streets, desperate to survive by any means. Others were forced to become itinerant workers. George and Lennie, the main characters, are two ranch workers. They are prime examples or itinerant workers due to the economic disaster they faced. They had slight difficulties maintaining a job as Lennie has a mental and almost physical disability. ...read more.

Just to sweeten up the deal even more he adds, "...I could cook and tend the chickens and hoe the garden some." and "I'd make a will an' leave my share to you guys in case I kick off," Candy chose his words carefully letting George know it will benefit everyone rather than it being a selfish gesture. Just to make sure they kept him in he used a very short but never the less a very effective emotional line, "When they can me here I wisht somebody's shoot me." Automatically they feel sympathetic towards him because he lost his hand and his best friend, the dog. It was after that conversation that Candy gained hope after all. However, a serious incident occurred which lead George to kill Lennie for the good and safety of others. He gave up on the dream and decided to become a part of what everyone else already was. "then - it's all off?" Candy asked sulkily. Without George, Candy couldn't't stand a chance making the dream come true alone and there was no persuading George to reconsider. Candy was vexed at Curley's wife as she laid dead, "Ever'body knowed you'd mess things up". ...read more.

They all wanted to be able to support themselves and survive from what they owned. The only difference being that some were unrealistic and they had different views of the dreams they wished too accomplish. In the past Curley's wife was close to being an actress twice. Only thing that stopped her was her mother, who didn't let this dream continue knowing what the consequences would be later on in life. George, Lennie and Candy were less than a month away from completing their task of obtaining the land. In the end Lennie accidentally ruined everything and didn't even know what he had caused. Crooks wasn't as close, he only had hopes of becoming apart of the dream, but nothing had been established officially. I think the situation on the whole affected George the most as it was originally his aim to work towards it and without it he felt like there was nothing left for him. He lost faith in his dream and his fellow companion. I believe Steinbeck looked at how the Great Depression affected the different people in America and sympathized on their behalf. All the characters represent all types of people in America; the elderly, disabled, women and the ethnic minorities. They all played important parts as they helped to show how major the issue was. ...read more.