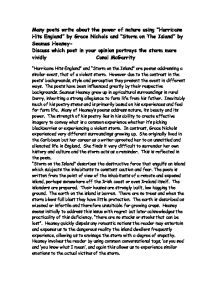 Many poets write about the power of nature using &quot;Hurricane Hits England&quot; by Grace Nichols and &quot;Storm on The Island&quot; by Seamus Heaney-Discuss which poet in your opinion portrays the storm more vividly

Many poets write about the power of nature using "Hurricane Hits England" by Grace Nichols and "Storm on The Island" by Seamus Heaney- Discuss which poet in your opinion portrays the storm more vividly Conal McGarrity "Hurricane Hits England" and "Storm on the Island" are poems addressing a similar event, that of a violent storm. However due to the contrast in the poets' backgrounds, style and perception they present the event in different ways. The poets have been influenced greatly by their respective backgrounds. Seamus Heaney grew up in agricultural surroundings in rural Derry, inheriting a strong allegiance to farm life from his father. Inevitably much of his poetry stems and is primarily based on his experiences and feel for farm life. Many of Heaney's poems address nature, its beauty and its power. The strength of his poetry lies in his ability to create effective imagery to convey what is a common experience whether it's picking blackberries or experiencing a violent storm. In contrast, Grace Nichols experienced very different surroundings growing up. She originally lived in the Caribbean but her career as a writer uprooted her to an unsettled and alienated life in England. She finds it very difficult to surrender her own history and culture and the storm acts as a reminder. This is reflected in the poem. "Storm on the Island" describes the destructive force that engulfs an island which subjects the inhabitants to constant caution and fear. The poem is written from the point of view of the inhabitants of a remote and exposed island, perhaps somewhere off the Irish coast or even Ireland itself. ...read more.

He identifies the storm as the enemy and suggests that the island inhabitants should endure and remain resolute 'we just sit tight'. Heaney loves to use sound patterns in his poetry and does this effectively to mirror the storm. Alliteration is used well alongside monosyllabic words to build the tension of the storm, 'Sink walls in rock and roof them with good slate'. Onomatopoeia echoes the sound of the storm in words like 'blast', 'flung spray' and 'spits'. This adds to the imagery created by metaphor and simile. A most evocative image is of the 'tragic chorus' reminding us of death or of the Greek mythologies that Heaney later translates. The simile of the tame cat is also effective in again taking the commonplace and transforming it into something menacing and 'savage'. The mood of the poem is reflective and begins as confident but becomes less so as the poem progresses. The final line of the poem is ambiguous. Heaney says that it is strange but the thing we fear is 'a huge nothing' .It is as if the air and wind are nothing because we cannot see it just like our own intangible or unspeakable fears. This is what Heaney seems to be contemplating through the metaphor of the storm. Another possibility is that the storm is a metaphor of the 'troubles'. Heaney has written frequently on the topic and it certainly impacted on his life in South Derry. Is the fear a fear of peace and of the unknown. ...read more.

So Nichols extends the metaphor just like Heaney sustains his battle imagery. Nichols continues to question the storm and uses contrasts or oxymorons to highlight the image, ' the blinding illumination... into further darkness', its is reminiscent of Heaney's oxymoron 'exploding comfortably'. The plunge into darkness is simply a power cut but could also reflect Nichols's feelings about her new environment. Nichols brings her poem to a climax by reconciling the two cultures. The warm winds ' break the frozen lake in me' and she realises that the Caribbean and England are part of the same planet, 'that the earth, is the earth, is the earth'. The storm has acted as a unifier and a channel of release for Nichols emotions. The storm in it's entirety could be viewed as a symbol of the struggle she has had in adapting to her new culture. We must presume that Nichols is speaking for all Caribbean immigrants, just as Heaney speaks on behalf of the islanders. Nichols uses a very different format to Heaney. She employs consistent repetition, rhetorical questions and short lines designed to increase the intensive effect of the hurricane. Heaney relies more on the effect of language and imagery. Heaney's poem is more enigmatic and universal, it could interpreted on many levels by the audience. Nichols, however, confines her audience to those who can relate to the specific cultures. I feel that her optimistic ending is somewhat unrealistic, we just have to refer to the problem of racism in England for consolidation of my view. Heaney relates to us all who fear ' the huge nothing' and because of this I feel he has been more successful in presenting the storm most vividly. ...read more.