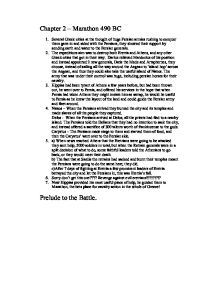 Chapter 2 - Marathon 490 BC 1. Several Greek cities at the thought of huge Persian armies rushing to conquer them gave in and sided with the Persians, they showed their support by sending earth and water to the Persian generals. 2. The expeditions aim was to destroy both Eretria and Athens, and any other Greek cities that got in their way. Darius relieved Mardonius of his position and instead appointed 2 new generals, Datis the Mede and Artaphernes, they choose, instead of sailing all the way around the Aegean to 'island hop' across the Aegean, and thus they could also take the useful island of Naxos. The army that was under their control was huge, including persian horses for their cavalry. 3. Hippias had been tyrant of Athens a few years before, but had been thrown out, he went over to Persia, and offered his services in the hope that when Persia had taken Athens they might instate him as satrap, he would he useful to Persia as he knew the layout of the land and could guide the Persian army and fleet around. 4. Naxos - When the Persians arrived they burned the city and its temples and made slaves of all the people they captured. ...read more.

Mode of battle - light armour wicker shields and archers and cavalry Battle Plan - weaken the Athenians at marathon before attacking a weakened Athens. The Battle (according to Herodotus). The Athenians hold the high ground sacred to heracles, at the south of the plain. ]The Persians hold the low ground at the north of the plain 5 Athenian generals want to fight , 5 want to wait (for Spartan reinforcements?) Callimachus, the polemarch, has the crucial eleventh vote. Militiades with a moving speech, persuades callimachhus to fight now. Yet fighting is delayed because Militiades will only lead out the army on the day appointed for him to lead. On his day the Athenian line, stretched beyond the norm and so weak in the centre, faces ther Persian line (but no mention of cavalry!!) From a distance of one mile apart the Greeks (amazingly) ran at the enemy The Athenians, strong on the flanks but weak in the centre, eventually win by surrounding the strong Persian centre with their strong flanks The defeated Persians escaped to their ships, only 7 of which were captured. Persian losses - 6400 Athenian losses - 192 The Persian survivors sail round to Athens for a surprise attack, BUT on seeing the Athenian army having zoomed back from Marathon to guard Athens on sacred ground of Heracles (again!) ...read more.

HE counted in total, 1.7 million men, but shepherd gives us a more reasonable amount by knocking a 0 off the end, around 200000 men. NB - throughout Herodotus' history he is trying to document what happened in tradition, not challenge it. As well as having 1,700,000 men in hi army, Xerxes gathered 3000 ships for his fleet. This consisted of 1207 triremes with main contributors being Phoenicia and Egypt. Shepherd suggests we use around 600 warships as a reasonable estimate. Herodotus' describes many of the nations in Xerxes army, he describes their clothes and their weapons, and when it comes to their weapons, the answer is surprisingly basic, and for one thing wicker shields doesn't shout out at you as being unstoppable.. Damaratus. Damaratus was an ex Spartan king, he had been unfairly disposed of by Cleomenes, and damaratus decided he would help the Persians take over Greece, he became Xerxes advisor, hoping to come into power once Greece had been captured, much like Hippias. When Xerxes asks Damaratus if he thinks Greece will face him, Damaratus replies telling him that the Spartans would never, never give up and become part of their empire, they would fight if there was 1 against 10,000, there motto being STAND FIRM AND WIN, OR DIE ...read more.