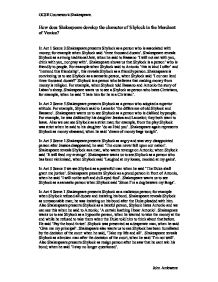 He said 'Pay the bond thrice'. Shylock was presented as a desperate man, when he said 'Give me my principal'. Shakespeare also wants us to see Shylock has been humiliated by the decision of the court when he said, 'Take my life and all'. Shakespeare reveals Shylock as a broken man after the decision of the court, when he said 'I'm not well'. Also Shakespeare presents Shylock as resign person after he saw that he cant win his bond; when he said 'I stay no longer questioned'. In conclusion, Shakespeare shows us how Shylock changed compared to earlier, when he was hating Christians and when he refuse to take the money and he was insisting on his bond. But later he changed and agreed to be a Christian and he wanted to take the money. ?? ?? ?? ?? GCSE Coursework Shakespeare. John Ambwene ...read more.