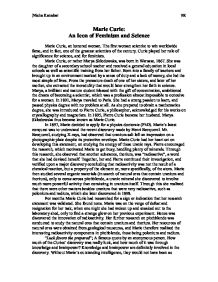 Marie Curie: An Icon of Feminism and Science.

Marie Curie: An Icon of Feminism and Science Marie Curie, an honored woman. The first woman scientist to win worldwide fame, and in fact, one of the greatest scientists of the century. Curie played her role of significance for science, and for feminism. Marie Curie, or rather Marya Sklodowska, was born in Warsaw, 1867. She was the daughter of a secondary school teacher and received a general education in local schools as well as scientific training from her father. Born into a family of teachers and brought up in an environment marked by a sense of duty and a lack of money, she led the most simple of lives. From the premature death of one of her sisters, and later of her mother, she extracted the incredulity that would later strengthen her faith in science. Marya, a brilliant and mature student blessed with the gift of concentration, ambitioned the dream of becoming a scientist, which was a profession almost impossible to conceive for a woman. In 1891, Marya traveled to Paris. She had a strong passion to learn, and passed physics degree with no problem at all. ...read more.

Through this she realized that there were other matters besides uranium that were very radioactive, such as polonium and radium, which she later discovered in 1898. For months Marie Curie had researched for a sign or indication that her research statement was validated. She found none. Marie was on the verge of defeat and resignation for her task, when one night she had woken up and sneaked out to the laboratory shed, only to find a strange glow on her previous experiment. Hence was discovered the innovation of radioactivity. Her further research on pitchblende was conducted to study the natural ores that contain uranium and thorium. Her resources of natural ores were obtained from geological museums, and Marie therefore realized the interesting radioactivity components in pitchblende, these being polonium and radium. "Luck favors the prepared"; A famous quote by an anonymous person. How much of the Curies' discovery was really luck, and how much of it was through knowledge and brainpower? Knowledge and brainpower are definitely involved in the discovery. Without Marie's outstanding intelligence, they would not have been as successful as they were. ...read more.

Marie Curie served as a nurse, using X-rays to locate bullets and shrapnel in the wounded. She created X-ray vans and supplied equipment for hospitals. In addition, Marie trained 150 female manipulators to help her. This, is how Marie Curie, served humanity. Society though, also directed her into her discovery. Without Henri Becquerel's discovery, Marie would not have had a sudden interest in this specific area of scientific research and therefore taken the initiative to lead her into her discovery. The Curies' work area required much diligence and devotedness. They often suffered themselves for the progress of their scientific research, which rules under moral and ethical schemes in their line of work. For example, Mr. Curie so graciously tested radium on his hand in order to find out its effect on man. Another example was the deaths of both Marie and Pierre Curie at earlier ages than usual, which was instigated by the effects of radium. Their weakness of working with radium did not stop their practice and love for it, but increased their devotedness as time went by. The Curies are known through history because of their love; love for science, love for humanity, and love for their country. |Nisha Kanabar 9R ...read more.