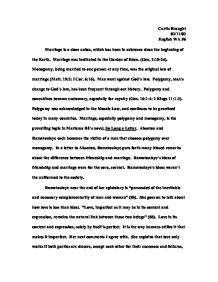 Marriage is a close union, which has been in existence since the beginning of the Earth. Marriage was instituted in the Garden of Eden.

Curtis Braught 02/11/03 English WA #6 Marriage is a close union, which has been in existence since the beginning of the Earth. Marriage was instituted in the Garden of Eden. (Gen. 2:18-24). Monogamy, being married to one person at any time, was the original law of marriage (Matt. 19:5; I Cor. 6:16). Man went against God's law. Polygamy, man's change to God's law, has been frequent through out history. Polygamy and concubines became customary, especially for royalty (Gen. 16:1-4; I Kings 11:1-3). Polygamy was acknowledged in the Mosaic Law, and continues to be practiced today in many countries. Marriage, especially polygamy and monogamy, is the prevailing topic in Mariama B�'s novel, So Long a Letter. Aissatou and Ramatoulaye each becomes the victim of a man that chooses polygamy over monogamy. In a letter to Aissatou, Ramatoulaye puts forth many biased remarks about the difference between friendship and marriage. ...read more.

Through the new marriage and the death of Ramatoulaye's husband, Ramatoulaye realizes that it was possible "despite everything, [she] remain faithful to the love of [her] youth" (55). Ramatoulaye's love for Mawdo B� was so great that even after his death she could not marry another. "Tansir and Daoda having been rejected, there were no more barriers between the suitors and me. I then watched filing past and besieging me old men in search of easy revenue, young men in search of adventure to occupy their leisure" (70). Ramatoulaye viewed her suitors as animals or beastly. Aissatou agreed with Ramatoulaye that "man is one: greatness and animal fused together. None of his acts is pure charity. None is pure bestiality" (32). The hatred and disgust that came with the change in Ramatoulaye's marriage helped her to make the decision to believe in fate. ...read more.

Friendship resists time, which wearies and severs couples" (54). In a marriage based on a similar philosophical ideology, there is a basis for common ground that leads to a foundation on which the marriage can always retrograde to. Having the same foundation allows for a relationship to transcend the difficult obstacles. Ramatoulaye during her epistle discloses her opinions or attitude towards many political topics. One such topic is woman's role in society. With this role came the problem of monogamy and polygamy. America has very little polygamy because women and men are taught to be at the same level. Even our society, one without polygamy, still goes against God's law on marriage. God made woman to be a suitable helper not to be an equal to Adam (Gen. 2:18-25). I do believe that America's way of dealing with this issue is better than how the Senegalese did. Ramatoulaye wanted to, through love, change women's role in society. ...read more.