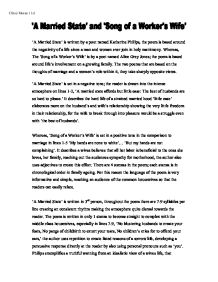 'A Married State' is written by a poet named Katherine Philips, the poem is based around the negativity of a life since a man and women ever join in holy matrimony. Whereas, The 'Song of a Worker's Wife' is by a poet named Alice Grey Jones; the poem is based around life's involvement on a growing family. The two poems that are based on the thoughts of marriage and a women's role within it, they take sharply opposite views. 'A Married State' is set in a negative tone; the reader is drawn into the intense atmosphere on lines 1-2, 'A married state affords but little ease: The best of husbands are so hard to please.' It describes the hard life of a strained married hood 'little ease' elaborates more on the husband's and wife's relationship showing the very little freedom in their relationship, for the wife to break through into pleasure would be a struggle even with 'the best of husbands'. Whereas, 'Song of a Worker's Wife' is set in a positive tone in the comparison to marriage in lines 1-5 'My hands are none to white'... ...read more.

'My happy little family, like a nest.' The poet's background is correlating with the poem by expressing the wives emotive language; she signifies her own thoughts and puts a hold to different opinions because she believes there is a satisfaction to motherhood, this is also express by using the simile 'like a nest', presuming that she take full responsibility to her children, like a bird protecting her nest of eggs. In S3L2 another simile is used, 'like glad little chicks in a throng,' referring to the first simile 'like a nest', a close family, creating an enchanting atmosphere towards the poet and the reader. 'A Married State' gives out a large contrast with negativity in a formal way of emphasizing how satisfactory unmarried is, in line 11, 'Attend on matrimony and husband too.' The poet describes marriage to be a trap that brings anxiety to a women's life, creating tension and passion towards the reader. This effect is also created in lines 13-14, 'Turn, turn apostate to love's levity. ...read more.

In the last line there is a clear showing and understanding of the hate and the view of women getting married is an easily sacrifice to hell, 'There's no such thing as leading apes in hell.' The punctuation creates a sudden stop to the poem, making it clear to the reader that the poet has proved her point, the poet has used a similar technique as 'Song of a Worker's Wife' by using an metaphor and the end of the poem, 'as leading apes to hell' the verb 'leading' creates a sharp thought of being treated as a slave, the word 'lead' in Tudor English means to have sexual intercourse, so that the poet is rephrasing marriage women to a pet, in all very critical view of marriage. Whilst comparing the two poems in conclusion, I prefer 'Song of a Worker's Wife' because it demonstrates how emotions can deeply affect a human and ultimately our personal well-being. Comparing to nature processes to express how the poet can use the strategy of resentment and one of the most powerful emotions of all, love, to create a reader's attention. ...read more.