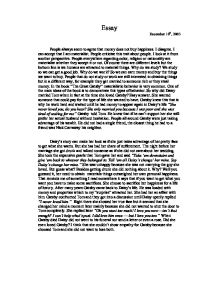 Materialism in the novel The Great Gatsby

Essay December 10th, 2003 People always seem to agree that money does not buy happiness. I disagree. I can accept that I am materialist. People criticize this trait about people. I look at it from another perspective. People everywhere regarding color, religion or nationality are materialist whether they accept it or not. Of course there are different levels but the bottom line is we humans are attracted to material things. Why do we study? We study so we can get a good job. Why do we work? So we can earn money and buy the things we want to buy. People that do not study or work are still interested in obtaining things but in a different way, for example they get married to someone rich or they steal money. In the book "The Great Gatsby" materialistic behavior is very common. One of the main ideas of the book is to demonstrate this types of behavior. ...read more.

She choose to sacrifice her happiness for a life of luxury. After many years Gatsby came back to Daisy's life. He was loaded with money and properties which to my "surprise" attracted her. She had her an affair with him. Gatsby confronted Tom and they got into a discussion until Daisy openly replied "I never loved him." Right there she showed her true face but it seemed that she changed her mind a moment later mainly because she did not wanted to shut the door to Tom completely. She replied later "Oh you want too much! I love you now---isn't that enough? I can't help what's past. I did love him once--- but I love you too." When Gatsby died Daisy did not went to his funeral nor send a letter or even a rose. Did she even loved Gatsby? I think that she couldn't show empathy for Gatsby because she choosed Tom and she did not want to lose both. ...read more.

Gatsby did not understand this, he thought that things will were the same when in fact things were very different because now Daisy was not only attached to Tom for money but because of her daughter and stability. In conclusion I think that the author greatly emphasized materialism in the novel. He story was all about money and what it could buy. This proves that everyone and everything have prize. I have gotten this conclusion from my own point of view, this is the way I have interpreted the book and some people might call this conclusion a little too harsh or untrue. This is my point of view and I think it is one of the main topics of the book. At the beginning of the book Nick took pride on calling himself an honest and straightforward person but after this whole experience changed him and he admitted it at the end when he replied to Jordan "I'm thirty. I'm five years too old to lie to myself and call it honor." By: Daniel Borge ...read more.