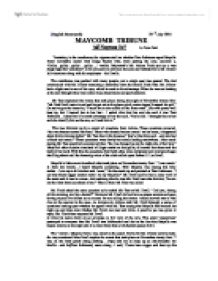 (English Homework) 19th July 1935 MAYCOMB TRIBUNE 'all Negroes lie? by Pujan Patel Yesterday, in the courthouse, the vigorous trail on whether Tom Robinson raped Mayella Ewell inevitably ended with Judge Taylor who, from polling the jury, received a, 'Guilty...guilty...guilty... guilty...,' verdict. Maycomb's Mr. Atticus Finch put up a very tough fight but 'somehow' it did not seem to convince the jury and Abbotsville's Mr. Gilmer left victorious along with his employers - the Ewells. The courthouse was packed with many people; not a single seat was spared. The trial commenced with Mr. Gilmer extracting a testimony from the sheriff, Heck Tate. Mr. Gilmer had a slight cast in one of his eyes, which he used to his advantage. When he was not looking at the jury thought they were under close observation and paid attention. Mr. Tate explained the events that took place during the night of November twenty first: "Mr. Bob Ewell came in and said to get out to his place quick, some nigger'd rapped his girl." On arriving at the house he, "Found her in the middle of the front room...She was pretty well beat up, but I heaved her to her feet... ...read more.

Finch then continued to consider the relationship between Miss Mayella and Tom Robinson. "I knew who he was, he passed the house everyday...I certainly did not ever ask him to come inside the fence." Mr. Finch asked Miss Mayella if she remembers Tom Robinson beating her around the face? Miss Ewell answered this direct question very vaguely; she seemed as if she did not have an answer to the question. Finally she answered, "No, I don't recollect if he hit me. I mean yes I do, he hit me...Yes, he hit- I just don't remember, I just don't remember...it all happened so quick." Miss Mayella burst out into another batch of tears. To round up Atticus summed up the events Miss Mayella said took place and asked her to 'identify the man who raped' her. She pointed directly at Tom Robinson. Whilst doing so Mr. Finch requested the defendant, Tom Robinson, to rise. A gentle murmur broke out through the court. He did not have a left arm therefore it would have been highly unlikely that Mr. Robinson could have been able to rape Miss Ewell. Mr. Finch addressed this very point to Miss Mayella but she burst out in a rage and repeated, " It all happened too fast." ...read more.

Judge Taylor was very angry and expelled him from the court. Mr. Gilmer's first few questions were trying to plant an idea into the jury's mind that anyone convicted of disorderly conduct could easily have it in his heart to take advantage of Mayella Ewell. But then Mr. Robinson made a fatal error; he said he felt sorry for her. Mr. Gilmer, like a nervous reaction, immediately 'attacked' Mr. Robinson by questioning him and pounding it into his head- "you felt sorry for her?" He also started trying to confuse Mr. Robinson but Mr. Robinson took control of the situation. The trial ended with Mr. Finch's last gasp for victory when he addressed the jury saying, "The state has not produced one iota of medical evidence to the effect that the crime Tom Robinson is charged with ever took place...The defendant is not guilty but someone in the court-room is...confident that you gentlemen will go along with assumption- the evil assumption- that all Negroes lie, all Negroes are basically immoral beings, all Negro men are not to be trusted around our women, an assumption one associates with minds of their calibre...Thomas Jefferson said that all men are created equal." Despite Mr. Finch's courageous attempt he failed and Tom Robinson was sent to prison on the charge of raping Miss Mayella Ewell on the eve of the twenty first November. (Word Count:2,111) ...read more.