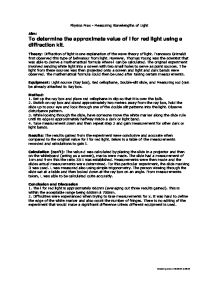 Physics Prac - Measuring Wavelengths of Light Aim: To determine the approximate value of l for red light using a diffraction kit. Theory: Diffraction of light is one explanation of the wave theory of light. Francesco Grimaldi first observed this type of behvaiour from light. However, Thomas Young was the scientist that was able to derive a mathematical formula where l can be calculated. The original experiment involved sending white light into a screen with two small holes to serve as point sources. The light from these sources was then projected onto a screen and light and dark bands were observed. ...read more.

Observe disturbance pattern. 3. While looking through the slide, have someone move the white marker along the slide rule until its edge is approximately halfway inside a dark or light band. 4. Take measurement down and then repeat step 3 and gain measurement for other dark or light bands. Results: The results gained from the experiment were conclusive and accurate when compared to the original value for l for red light. Below is a table of the measurements recorded and calculations to gain l. Calculation (con't): The value d was calculated by placing the slide in a projector and then on the whiteboard (acting as a screen), marks were made. ...read more.

L was measured also using simple trigonometry. The person viewing through the slide sat at a table and then looked down at the ray box on an angle. From measurements taken, L was able to be calculated quite accuratly. Conclusion and Discussion 1. The l for red light is approximately 662nm (averaging out three results gained). This is within the acceptable range being 650nm � 700nm. 2. Difficulties were experianced when trying to take measurements for x. It was hard to define the edge of the white marker and also count the number of fringes. There is no editing of the experiment that would make a significant difference unless different equipment is used. ?? ?? ?? ?? Created by ckd on 02/05/07 at 08:05 ...read more.