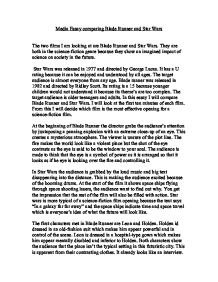 Media Essay comparing Blade Runner and Star Wars The two films I am looking at are Blade Runner and Star Wars. They are both in the science-fiction genre because they show an imagined impact of science on society in the future. Star Wars was released in 1977 and directed by George Lucas. It has a U rating because it can be enjoyed and understood by all ages. The target audience is almost everyone from any age. Blade runner was released in 1982 and directed by Ridley Scott. Its rating is a 15 because younger children would not understand it because its theme's are too complex. The target audience is older teenagers and adults. In this essay I will compare Blade Runner and Star Wars. I will look at the first ten minutes of each film. From this I will decide which film is the most effective opening for a science-fiction film. At the beginning of Blade Runner the director grabs the audience's attention by juxtaposing a panning explosion with an extreme close-up of an eye. This creates a mysterious atmosphere. The viewer is unsure of the plot line. The fire makes the world look like a violent place but the shot of the eye contrasts as the eye is said to be the window to your soul. ...read more.

He is also9 wearing a cape, this creates power when he walks as it swishes behind him. This all shows Darth Vader's power which shows a similarity between him and the character Holden in Blade Runner. The overall impressions of the Star Wars characters are very different as Darth Vader is a huge contrast with C3PO and R2D2. In Blade Runner the costumes were very different and the people were responsible for where they were. But in Star Wars the only costumes and Darth Vader's and robot costumes and they are all in the same setting. There is a variety of sound in Blade Runner: there are chimes and flutes. The music is usually very quiet and doesn't have a catchy melody. This helps to create mystery. The sound effects are of flying cars driving about. The dialogue, too, helps to add to the confusion. An example of this is when Leon is being interviewed, "I'm kinda nervous when I take tests [talks about his hotel] Is this the test now?" The audience is already confused from the camera shots and settings, now as one of the characters is confused and frustrated it adds to their confusion and makes them feel uneasy. In Star Wars, the sound is loud and uplifting, it makes the audience excited. It does this by starting with an orchestra with horns and bass. ...read more.

In Blade Runner the atmosphere is sinister. The theme of the 'eye' as a symbol runs throughout the film. It is used as a sign of power. In the scene with Leon and Holden the audience feel worried. They expect Leon to do something violent because of the way he is jumpy and angry. He becomes more and more agitated as the scene progresses. The lighting is dark and dull in all of the scenes. It works well with the sound because the music is quite. The viewers can't hear or see much so they feel vulnerable and worried because they rely on these senses. The atmosphere in Star Wars is excitable and enjoyable. In Star Wars masks are quite important because they are linked with the dark side. The masks make the wearer appear less human and more insect-like. This is similar to Blade Runner because of the secretivity. The lighting is very bright and futuristic, this works with the music to make the audience feel happy and as if they too are in a futuristic world. The audience feel reassured in Star wars but unsure in Blade Runner this is one of the big differences. I personally find Star Wars to have the most effective film opening in the science-fiction genre because it looks and feels more futuristic than Blade Runner. It suits its target audience because it is an understandable feel-good film. However both films are good interesting science fiction. ...read more.