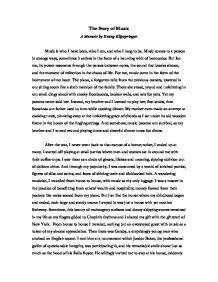 Memoir. The day I met his love, Daisy Buchanan, all I saw was her sad face filled with beautiful features. However, I must admit I wasnt in the best of moods as I had just woken up from a nap and was quite embarrassed to be caught in the act when Gatsb

The Story of Music A Memoir by Ewing Klipspringer Music is who I have been, who I am, and who I long to be. Music comes to a person in strange ways, sometimes it arrives in the form of a haunting whir of harmonics. But for me, its power resonates through the pauses between notes, the sound that breaks silence, and the moment of reflection in the chaos of life. For me, music came in the form of the instrument of my heart. The piano, a forgotten relic from the previous owners, towered in our sitting room like a sixth member of the family. There she stood, proud and unfaltering in our small dingy shack with creaky floorboards, broken walls, and rats for pets. Yet my parents never sold her. Instead, my brother and I learned to play her; first scales, then Sonatinas our father used to hum while cooking dinner. My mother even made an attempt at cooking tunes, plunking away at the unfaltering grace of chords as I sat under its old wooden frame in the boom of the tingling strings. ...read more.

The day I met his love, Daisy Buchanan, all I saw was her sad face filled with beautiful features. However, I must admit I wasn't in the best of moods as I had just woken up from a nap and was quite embarrassed to be caught in the act when Gatsby asked me to play. If I remember correctly, I made up some lousy excuse but proceeded to play a classic when I saw the desperation on his face. Once they left, we sat in the parlor with the hum of rain drizzling on the roof. "Without her, the seeds root, the rain falls, the grass grows, but I die." He smiled a little, and I did too. That was the last we spoke about her, or at all. I caught him a couple of times fleeing out the door in a waft of cologne or finishing off the newspaper as I strolled into the kitchen, but not much else. I continued my days aimlessly playing tennis and amusing myself with useless activities. I would sleep late, wasting away my time staring at the clock's hands go by whilst skipping my fingers on the piano until my eyes It was an ungodly hour when I looked up from the lines of black and white at the sight of Gatsby's darkened face. ...read more.

I did not move and then stupidly ran my hands frantically down my body just incase I hadn't felt the gunshot. When I finally came to my senses and realized the gun had not been pointed at me, I ran downstairs to find the doors to the pool spread open. I did not need to go outside to realize what had just happened. I did not need to know the details. Death was detail enough. I ran to my room and found whatever loose items I could find and stuffed it into a case. I did not think, I just moved and then I was gone. "So . . ." they said, with their wineglasses delicately poised. They seemed to mock at something they could not understand. "So . . ." they said again, amused and insolent. The silver on the table glittered, and the red wine in the glasses seemed to be the blood I had wasted in a foolish cause. As I played them my song of sorrow I cried my heart into my notes. I should have stayed for the funeral. I should have cared. Now, I have nothing, nothing but music. Music is my present. Music will be my future. But Gatsby was my past. ...read more.