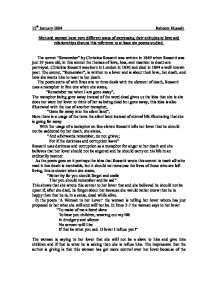 Men and women have very different ways of expressing their attitudes to love and relationships discuss this reference to at least six poems studied.

12th January 2004 Raheem Hussain Men and women have very different ways of expressing their attitudes to love and relationships discuss this reference to at least six poems studied. The sonnet "Remember" by Christina Rossetti was written in 1849 when Rossetti was just 19 years old, in this sonnet the themes of love, loss, and reaction to death are portrayed. Christina Rossetti was born in London in 1830 and died in 1894 a well-known poet. The sonnet, "Remember", is written to a lover and is about their love, her death, and how she wants him to react to her death. The poem starts of with lines one to three deals with the element of death, Rossetti uses a metaphor in line one when she states, "Remember me when I am gone away", The metaphor being gone away instead of the word dead gives us the idea that she is she does not want her lover to think of her as being dead but gone away, this idea is also illustrated with the use of another metaphor, "Gone far away into the silent land", Here there is a usage of the term the silent land instead of eternal life illustrating that she is going far away. With the usage of a metaphor on line eleven Rossetti tells her lover that he should not be saddened by her death, she states, "And afterwards remember, do not grieve; For ...read more.

In the poem 'My Last Duchess' he is talking about what his wife was like. To show this its states, "Her mantle laps Over my lady's wrist too much,' This suggests the Duke is saying that his wife was very popular and she was liked by a lot of people. It is also stated that his power and status were very important to him and his self respect. Also that he believed she didn't appreciate being the Duke's wife. He didn't like the attention his wife gave other people because he felt that he should be the only one getting the attention. The impression that is given by the author is that he wanted his wife to be a slave to him and obey everything he said whereas in the poem 'A Woman to her Lover' the woman exclaims to her lover that she won't be his slave and obey everything he says. He then says, "Just this Or that in you disgusts me; here you miss, Or there exceed the mark" Here the man is not able to tell his wife that he didn't like what she was doing because he thought it as being depleted. He made her life very miserable that she committed suicide. He then arranged her death, and then arranged his own marriage to the count's daughter. ...read more.

The surrounding also gets affected as it seems midnight to him at noonday. The author then uses alliteration when he says "And blood burnt round my heart" From this we get a very harsh image of blood burning around his heart. The word blood is just very frightening. The author then says in the final verse, "Are flowers the winter choice? Is love bed always snow?" In this the author is referring to winter and snow. He is suggesting love is cold and he uses rhetorical questions to emphasize this. He thinks that she seemed to hear his silent voice as in silent communication. He also never saw a face so sweet before. Then in the final lines he uses a metaphor when he says "My heart has left its dwelling place And can return no more. This gives the reader the impression that his heart is lost and nothing will ever be the same for him again. We get the impression that is not lasting love just an instant attraction for the man and how he falls for her. This poem shows how the man falls deeply in love with a woman at first sight. So after analyzing these two poems they contradict each other very much. 'A Birthday" refers to how a woman sees love as being very beautiful and 'First Love' refers to how a man believes love is very traumatic. ...read more.