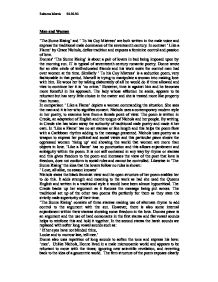 Men and Women in The Sunne Rising and To his Coy Mistress.

Men and Women 'The Sunne Rising' and ' To his Coy Mistress' are both written in the male voice and express the traditional male dominance of the seventeenth century. In contrast ' Like a Flame' by Grace Nichols, defies tradition and exposes a feminine control and passion of love. Donnes' 'The Sunne Rising' is about a pair of lovers in bed being imposed upon by the morning sun. IT is typical of seventeenth century romantic poetry. Donne wrote for an elite circle of well-educated friends and his work sows the control men had over women at the time. Similarly ' To his Coy Mistress' is a seduction poem, very fashionable in that period. Marvell is trying to manipulate a woman into making love with him. He woos her by talking elaborately of all he would do if time allowed and tries to convince her it is 'no crime.' However, time is against him and he becomes more forceful in his approach. The lady whose affection he seeks, appears to be reluctant but has very little choice in the matter and she is treated more like property than human. In comparison ' Like a Flame' depicts a woman commanding the situation. She sees the man and it is her who signifies consent. ...read more.

In the second stanza the harsh sounds are replaced with softer long vowel sounds such as: ' If her eyes have not blinded thine, Looke and to morrow late, tell mee.' Donne also uses repetition of long sounds to soften the tone and express his love: 'mee'. Unlike Nichols, Donne lived in a male microcosmic world and appears to be reluctant to move with the times; ignoring new scientific revelation, and reverting back to the idea of a geocentric world. The firm structure of the poem exposes clearly the narrow mindedness of men at the time towards women and their view that woman could be controlled. This view is echoed in ' To his Coy mistress.' The poem is also written in a controlled manner with three distinct stanzas, use of rhyming couplets and each line has four main stresses. The poet is trying to manipulate a woman into bed with him and the set structure helps show his arguments and it them flow in an ordered manner. The three stanzas develop the argument and show each stage as it is formed. Each rhyme is the ending of one view or point in the overall argument. The couplets also provide a lot of enjambment within the stanzas and in the first stanza this makes the poem flow in a seductive sensual way. ...read more.

The physical aspect is shown by the lines: 'his hands soft his words quick his lips' and they also make the poem more erotic. It is not only the danger of love itself but the danger of being caught that is implied within the poem. The silent agreement of ' I nod,' and the fact that they meet at night reinforce the danger of love. The flame represents their love and it brings light. The heat from the flame makes scene more sexual. The flame also represents the freedom of the woman. 'Raising up /from my weeding/ of ripening cane' shows at face value a woman standing up from working in the fields. On another level it shows the woman standing up for her rights as a woman to control. The 'ripening can' is the social view and as it is 'ripening' it is shown to be developing and the role of women in society and the day of them being domineered over is changing. The 'weeding' suggests that she has been tending the cause to aid it to grow properly. There is a strong use of 'I' and 'me' and it gives the poem female authority. In 'The Sunne Rising' the tone is tense at first and implies that the poet is annoyed at being watched by the morning sun. As the poem moves on the tone becomes more relaxed and romantic. ...read more.