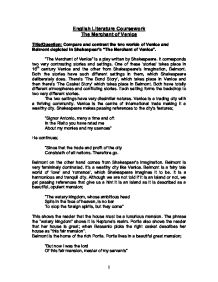 English Literature Coursework The Merchant of Venice Title/Question: Compare and contrast the two worlds of Venice and Belmont depicted in Shakespear's "The Merchant of Venice". "The Merchant of Venice" is a play written by Shakespeare. It corresponds two very contrasting stories and settings. One of these 'stories' takes place in 16th century Venice and the other from Shakespeare's imagination, Belmont. Both the stories have such different settings in them, which Shakespeare deliberately does. There's 'The Bond Story', which takes place in Venice and then there's 'The Casket Story' which takes place in Belmont. Both have totally different atmospheres and conflicting stories. Each setting forms the backdrop to two very different stories. The two settings have very dissimilar natures. Venice is a trading city with a thriving community. Venice is the centre of International trade making it a wealthy city. Shakespeare makes passing references to the city's features; "Signor Antonio, many a time and oft In the Rialto you have rated me About my monies and my usances" He continues; "Since that the trade and profit of the city Consisteth of all nations. Therefore go. Belmont on the other hand comes from Shakespear's imagination. Belmont is very femininely dominated. It's a wealthy city like Venice. ...read more.

This makes the bond a murderous one especially between Shylock and Antonio. Shylock wants revenge for the many times he as a Jew has been hurt. This side of the play is dominated by hate. The main themes that take place in Venice are hatred, religious intolerance, revenge, greed and prejudice. This reflects upon the city as being murderous, dramatic and tense. Whereas Belmont on the other hand is a city of Love, marriage, romance and comedy. Belmont is an aspect of the play, which brings the comedy, fairytale romance into perspective. It changes the play from tense and murderous to fun and comedic. It breaks up the dark, horrid features of Shylock and adds gentle, beautiful features of Portia and Bassanio and Lorenzo and Jessica; "an equal pound of your fair flesh, to be cut off and taken" to "How sweet the moonlight sleeps upon this bank!" This also shows that Belmont is a peaceful, moonlit and calm place to be whereas Venice is masculine and tense. The casket story is set in Belmont; it mainly captures Portia, and her great beauty; "In Belmont is a lady richly left, And she is fair, and - fairer than that word- Of wondrous virtues. ...read more.

Belmont's atmosphere on the other hand is calm, peaceful, and free from the tensions of Venice; "How sweet the moonlight sleeps upon this bank! Here will we sit, and let the sounds of music Creep in our ears; soft stillness and the night Become the touches of sweet harmony" Shakespeare has chosen to set "The Merchant of Venice" in two very different settings because the play has two very different stories in it. One reason could be to provide a sharp and dramatically effective contrast. Another reason maybe The Venetian setting provides us with the serious side of tension. Conversely Belmont gives us the 'Casket' story, which lightens the mood throughout the whole play, because Shakespeare has chosen to go back and forth from Belmont to Venice. For example the great drama of the court scene just before the play's end is immediately followed by the romance and gentle comedy of the play's final scene, the coming together of the three lovers, Bassanio and Portia, Gratiano and Nerissa and Lorenzo and Jessica. The play finishes in Belmont on a note of love and harmony rather than in Venice on a note of hatred, vengeance and betrayal. ?? ?? ?? ?? 1 ...read more.