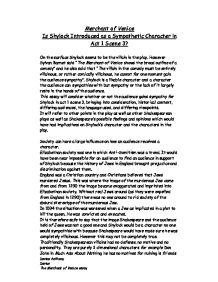 Merchant of Venice Is Shylock Introduced as a Sympathetic Character in Act 1 Scene 3? On the surface Shylock seems to be the villain in the play. However Sylvan Barnet said "The Merchant of Venice shows the broad outline of a comedy" and he also said that "The villain in the comedy must be entirely villainous, or rather comically villainous, he cannot for one moment gain the audience sympathy". Shylock is a likable character and a character the audience can sympathise with but sympathy or the lack of it largely rests in the hands of the audience. This essay will consider whether or not the audience gains sympathy for Shylock in act 1 scene 3, bringing into consideration, historical context, differing audiences, the language used, and differing viewpoints. It will refer to other points in the play as well as other Shakespearean plays as well as Shakespeare's possible feelings and opinions which would have had implications on Shylock's character and the characters in the play. Society can have a large influence on how an audience receives a character. Elizabethan society was one in which Anti-Semitism was a trend. It would have been near impossible for an audience to find an audience in support of Shylock because the history of Jews in England brought prejudice and discrimination against them. England was a Christian country and Christians believed that Jews murdered Jesus. ...read more.

Although Shylock says this aside he will not necessarily lose audience sympathy. He is being deceitful but this could be because he is forced to hide his true feelings. He is involving the audience, in the RNT film version by Trevor Nun he talks into the camera, interacting directly with the audience. Rather than being sly he is being open with the audience and allows them to get to know him. Later in the scene Shylock voices his frustrations to Antonio, although he does not reveal his plot for revenge he is being less deceitful. He goes into detail when talking about what Antonio has done to him and adds to the audience's sympathy. His defense extends to defending his justifying his usery. He uses scripture to justify his money-making method. However Antonio points out that "many cite scripture fore his purpose" and sympathy brought to Shylock. Shylock's defense is not the only reason the audience likes him. He also uses comical language. Although he sometimes seems sarcastic and toys with other characters (1:3:21-23) all these dimensions of his personality add to the audience relationship with him and therefore sympathy is increased. In contrast the audience do not see very much of the other characters personalities and does not get to know them as well. The audience sees Shylock's home life and gets to know him yet the other characters have less of a connection. ...read more.

He is stripped of his wealth, his daughter, his values and his religion. In this essay may viewpoints have been considered, the effect of society and prejudice has been evaluated, the influences of an actor and director must be considered. A director can cut out a section and in the 1993 RSC Production the director David Thaker cut out Shylock's speech (1:3:38-48) that explains his hatred for Antonio. This would have lost sympathy for Shylock, as his hatred would then seem unfounded. Shylock's plot for revenge for what Antonio has done to him begins in act 1 scene 3 when the bond is made. An actor can decide whether he wants to portray Shylock as an evil cunning man beginning a plan for revenge or a man making a kind gesture offering friendship. He could laugh as the penalty is a joke or laugh at Antonio cruelly and either increase or reduce audience sympathy for Shylock. When the audience gains sympathy for Shylock it is not always unanimous. Some people will have seen Shylock from the beginning as a villain and become closed emotionally, unable to allow themselves to sympathise as the Elizabethan audience would have been because of prejudice. Shylock is introduced as a sympathetic and likable character in act 1 scene 3 but whether or not the audience sympathises with Shylock depends on whether or not they are willing to and whether or not the directors and actors will allow them to. ?? ?? ?? ?? Davina Anthony Darius The Merchant of Venice essay ...read more.