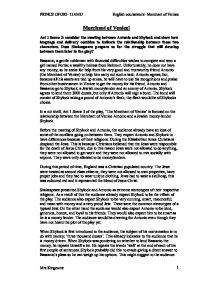 Merchant of Venice! Act 1 Scene 3: consider the meeting between Antonio and Shylock and show how language and delivery combine to indicate the relationship between these two characters. Does Shakespeare prepare us for the struggle that will develop between them later in the play? Bassanio, a gentle nobleman with financial difficulties wishes to compete and woo a girl named Portia; a wealthy heiress from Belmont. Unfortunately, he does not have any money, so he seeks for help from his very good and trustworthy friend Antonio (the Merchant of Venice) to help him carry out such a task. Antonio agrees, but, because all his assets are tied up at sea, he will have to use his recognitions and praise from other businessmen in Venice to get the money for his friend. Antonio and Bassanio go to Shylock, a Jewish moneylender and an enemy of Antonio. Shylock agrees to lend them 3000 ducats, but only if Antonio will sign a bond. The bond will consist of Shylock taking a pound of Antonio's flesh; the flesh would be of Shylocks choice. In a nut shell, Act 1 Scene 3 of the play, 'The Merchant of Venice' is focused on the relationship between the Merchant of Venice Antonio and a Jewish money-lender Shylock. Before the meeting of Shylock and Antonio, the audience already have an idea of some of the conflicts going on between them. They expect Antonio and Shylock to have differences because of their religions. During the Elizabethan times Christians despised the Jews. This is because Christians believed that the Jews were responsible for the death of Jesus Christ, due to this reason Jews were not ...read more.

This emphasis how much Shylock hates Antonio because he is willing his whole religion be cursed because of a stupid disagreement that he has with a rival. An actor playing Shylock would probably deliver the lines when Shylock uses 'well' a lot by stroking his beard and scratching his head. This would suggest to the audience that, Shylock is thinking and is scheming something as he talks to Bassanio. He may also probably deliver his lines talking to himself a lot because as a Jew he does not relate himself very well to Christians. Overall, I think that William Shakespeare has presented Shylock in the opening of the play to be a tactically astute man. This is littered all over the scene. An example of this was when Bassanio came to Shylock for help. He could easily have said yes or no to Bassanio but he waits and he ponders on how he can make the situation as much of an advantage as possible to him. During the play, Shylock can also be seen as a very proud Jew. He proves this by saying he will not do anything that his religion pursues him not to do. He also proves this by continually wearing his religious clothing like his gabardine and his skull cap even though it has been repeatedly spat at. The conflicts that happen later in the play are due to the fact that both Shylock and Antonio are proud of their respective religions. When Shylock says "I hate him for he is a Christian", this would make the audience hate Shylock more as he is been disrespectful to Christians. ...read more.

However Bassanio quickly realises the risks involved in the bond and tries to advise Antonio to back off. He says "I'll rather dwell in my necessity". Yet, Antonio in buoyant mood and as confident as ever, insists to Bassanio not to worry. He states "why, fear not, man, I will not forfeit it." Shylock gladly accepts as this is to his advantage. Either way this goes he does not loose. If Antonio's ships arrive he gets his money and if it doesn't he gets a pound of Antonio's flesh. Overall the audience may respond to Antonio's comments by saying that he is foolhardy. Bassanio as a cautious and a well thought gentleman and Shylock as just plain evil but with good reasons for plotting such evil twisted things against another human. As the scene ends Antonio uses a rhyming couplet, "come on, in this there can be no dismay, my ships come home a month before the day." This leaves the audience wanting to know more because they think that Antonio's ships might sink and he thinks that he just got an edge over Shylock. The ending of this scene is like a cliff hanger, it has been put in a way to leave the audience guessing whether everything will turn out alright for Antonio or whether Antonio will be able to pay Shylock back with no problems. The audience would also want to know whether the ships actually get sank or something happens to it on sea and they would want to know what Antonio's reactions are. ?? ?? ?? ?? PRINCE OFORI- 11AMU English coursework- Merchant of Venice 1 Mrs Kingcome ...read more.