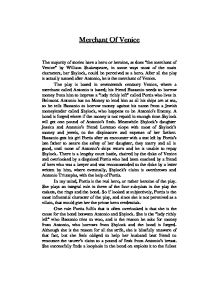 Merchant Of Venice The majority of stories have a hero or heroine, as does "the merchant of Venice" by William Shakespeare, in some ways most of the main characters, bar Shylock, could be perceived as a hero. After all the play is actually named after Antonio, he is the merchant of Venice. The play is based in seventeenth centaury Venice, where a merchant called Antonio is based; his friend Bassanio needs to borrow money from him to impress a "lady richly left" called Portia who lives in Belmont. Antonio has no Money to lend him as all his ships are at sea, so he tells Bassanio to borrow money against his name from a Jewish moneylender called Shylock, who happens to be Antonio's Enemy. A bond is forged where if the money is not repaid in enough time Shylock will get one pound of Antonio's flesh. Meanwhile Shylock's daughter Jessica and Antonio's friend Lorenzo elope with most of Shylock's money and jewels, to the displeasure and expense of her farther. ...read more.

One role Portia fulfils that is often overlooked is that she is the cause for the bond between Antonio and Shylock. She is the "lady richly left" who Bassanio tries to woo, and is the reason he asks for money from Antonio, who borrows from Shylock and the bond is forged. Although she is the reason for all the strife, she is blissfully unaware of that fact, but she feels obliged to help her husband best friend to renounce the usurer's claim to a pound of flesh from Antonio's breast. She successfully finds a loophole in the bond on exploits it to the fullest extent, overthrowing Shylock in a spectacular fashion devastatingly deflating his ego and gaining genuine heroine status. Another point that shines in Portia's favor is that she manages to topple the bond between Antonio and Shylock despite being a woman; women in the seventeenth century weren't educated to the extent men where, the average woman didn't have any education. ...read more.

Undoubtedly Portia is blatantly discriminated against, by todays standard, in the play, but that was the way of the time and no one was looking at it like it was a problem. It was accepted in those days that women should marry, were not allowed in courtrooms and so on. Portia is also in some way oppressed by her dead father, he would not let her chose her own husband, he had denied her "the right of voluntary choosing," but luckily the man she loved chose the right casket an won the right to marry her. She personally feels oppressed by this she says, "the lottery of my destiny bars me the right of voluntary choosing," she does not admit to feeling belittled by anything else so her wording is a very clear indication of how she feels. Portia undoubtedly proves herself as one of Shakespear's strongest characters and proves her worth in the play. She more than holds her own in the tense situations she gets put in and triumphs over her enemies. By doing this I believe that she proves herself a worthy heroine of the play. ...read more.