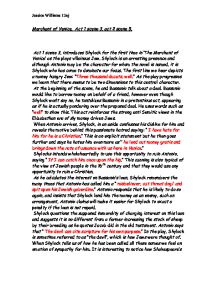 Merchant of Venice. Act 1 scene 3, act 2 scene 5. Act 1 scene 3, introduces Shylock for the first time in 'The Merchant of Venice' as the plays villainous Jew. Shylock is an arresting presence and although Antonio may be the character for whom the novel is named, it is Shylock who has come to dominate our focus. The first line we hear depicts a money hungry Jew: ''Three thousand ducats, well.'' As the play progresses we learn that there seems to be two dimensions to this central character. At the beginning of the scene, he and Bassanio talk about a deal. Bassanio would like to borrow money on behalf of a friend, however even though Shylock won't say no, he tantalizes Bassanio in a pretentious act, appearing as if he is actually pondering over the proposed deal. He uses words such as ''well'' to show this. This act reinforces the strong anti Semitic views in the Elizabethan era of sly money driven Jews. ...read more.

Shylock questions the supposed immorality of charging interest on this loan and suggests it is no different from a farmer increasing the stock of sheep by their breeding as he quotes Jacob did in the old testament. Antonio says that '' The devil can cite scripture for his own purpose.'' In the play, Shylock is sometime referred to as ''the devil'', which is how Jews were thought of. When Shylock tells us of how he has been called all these names we feel an emotion of sympathy for him. It is interesting to notice how Shakespeare's portrayal of Shylock fluctuates between the stereotypical villainous Jew and a human person. This fluctuation encourages us to think that perhaps Shakespeare is trying to move away from the stereotypes of the people in era show us that Jews can be like ''normal'' people. When Shylock agrees to the terms he states that if he is not given his money he wants an ''equal pound of fair flesh.'' ...read more.

Lancelot comes back at Shylocks words to Jessica (in an aside) '' mistress look out at a window for all this. There will come a Christian by will be worth a jewes eye.'' Shylock hears this and immediately wants Lancelot to repeat what he has just said, but, Jessica in an effort to stop any bickering replies, '' His words were farewell, mistress, nothing else.'' Indeed, Shylock understands the Christians and their culture much better than they understand him. The closing of this scene is a testimony by Shylock of his relief that Lancelot has gone because '' he sleeps by day more than the wild cat,'' and is basically lazy. The last lines mirror the ending of the relationship between Shylock and Jessica said conventionally in rhyming couplets to add closure. This part of the play causes us to reconsider our feeling towards Shylock as he has '' lost his daughter.'' It is arguable that Shylock receives far less of a stark portrayal than was common in Shakespeare's time and that given the constant degradation he endures, we can feel sorry for him. Jessica Williams 12aj ...read more.