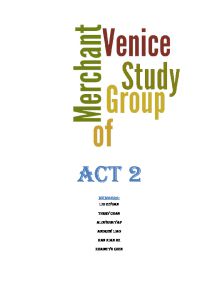 Act 2 Members: Liu Ziyuan Terry Chan Aloysius Yap Andrew Liao Han Xian He Zhang Yu Chen Table of Contents Characters 1 Relationships 3 Themes 5 Characters Prince of Morocco Quote Speaker What it reveals "Hath feared the valiant" Morocco He is very boastful, trying to convince Portia that he is brave as heroes would cower in fear upon seeing him. "The best regarded virgins of our clime Have loved it too" Morocco He is boasting once again that his charm and bravery attracts all women to him. "If Hercules and Lichas play at dice Which is the better man, the greater throw May turn by fortune from the weaker hand." Morocco Although he is very boastful and brave, he knows that only luck would play a part in his bid to marry Portia, and states that it might in fact be the weaker man who gets Portia. (Which actually does happen) Portia "then, stood as fair As any corner I have looked on yet For my affection" Portia She is stating that the Prince of Morocco stands as fair a chance to get Portia as everyone else, but is also secretly insulting him as he is not fair-skinned. ...read more.

He is also the person that Antonio dislikes. Shylock is the money loaner which loaned the money to Antonio since Antonio's money is at sea. Antonio owns Shylock a pound of flesh if Antonio does not return the money in the given time. Bassanio & Portia: Bassanio and Portia love each other. Portia is a rich lady which a lot of people love, including Bassanio, but, she only loves Bassanio and wants to be his wife. Bassanio used the money that Antonio got to travel to where Portia is to ask her to marry him. Shylock & Jessica: They are in the same family. Shylock is Jessica's father and Jessica is Shylock's daughter. Although they are in the same family, Shylock does not really care about Jessica and Jessica hates Shylock as her father. Appearance and Reality Quote Speaker What the Quote Reveals I like not fair terms and a villain's mind. Bassanio It reveals how Bassanio feels that although Shylock made a good deal with them about the lending of 3000 ducats, he is suspicious of his real intent. Justice and Mercy Cursed be my tribe if I forgive him! Shylock It shows that Shylock wants justice to be done to Antonio for his insults against moneylending and Jews. ...read more.

For example, Lorenzo tricks his father, Old Gobbo, into believing that he is a young gentleman and not his son. This was achieved by exploiting the fact that Old Gobbo was sand-blind. The theme of appearance and reality is seen here through the fact that although Lorenzo appears to Old Gobbo to be a young gentleman, Lorenzo is in fact Old Gobbo's son. Another good example of this theme would be when the Prince of Morocco selects a casket for his chance to marry Portia. After he chooses the wrong casket, the gold one, he finds a message in the casket saying that all that glitters is not gold. This portrays the theme of appearance and reality. Also, the theme is once more expressed in the part of the play when Shylock seems to fail to see the value of human relationships when he runs along the streets, lamenting his ducats after his daughter stole his money and ran away with a Christian, hinting that he values his money more than his daughter. However, we see later on that he does have human feelings, and does value relationships. This can be seen from the fact that he was deeply saddened when he heard that his daughter had sold the ring that his deceased wife had given him, in exchange for a monkey. ...read more.