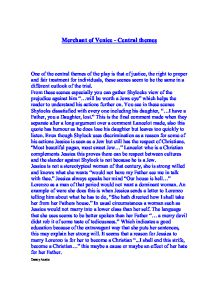 Merchant of Venice - Central themes One of the central themes of the play is that of justice, the right to proper and fair treatment for individuals, these scenes seem to be the same in a different outlook of the trial. From these scenes especially you can gather Shylocks view of the prejudice against him "...will be worth a Jews eye" which helps the reader to understand his actions further on. You see in these scenes Shylocks dissatisfied with every one including his daughter, "...I have a Father, you a Daughter, lost." This is the final comment made when they separate after a long argument over a comment Lancelot made, also this quote has humour as he does lose his daughter but leaves too quickly to listen. Even though Shylock uses discrimination as a reason for some of his actions Jessica is seen as a Jew but still has the respect of Christians. "Most beautiful pagan, most sweet Jew..." Lancelot who is a Christian complements Jessica this proves there can be respect between cultures and the slander against Shylock is not because he is a Jew. ...read more.

Torch is a metaphor for Lorenzo�s love and is saying he wants Jessica to have his love, this shows that he is truly in love and this is not a convenience marriage as some were such as Portia�s. In the three scenes and the rest of the Play Lorenzo does not have a major role. If Lorenzo were not entered into the play the audience would not have the twist in the play to draw out some of Shylocks personality. This shows when Shylock is quoted by Solanio as saying "my daughter, o my ducats..." here Shylock compares the loss of his daughter to the loss of his money as if they were two equal comparisons, this shows his ignorance in love and leads on to his insecurity. When Shylock is insecure he attempts to take control of other people such as his daughter, so when his daughter runs away it unsettles him, this was true until the chance came to take control of Antonio's life. This effects the audience's perception of Shylock for the better in my opinion because it generates sympathy. ...read more.

Some of the actions that he takes help support this idea such as when he turns down an invitation to supper; this is projected as something minor but in the lower class society this would be seen as a major insult. Also when he takes Antonio to trial for possibly his life, this seems to be a very primitive idea of justice. Another example of Shylocks language being of a lower class is in the quote "What says the fool of Hagar's offspring." When Shakespeare writes the speech of someone with a higher status the character displays their education in their language. Their education would have been with classical literature of Greece and Rome so they often refer to the mythology of these countries, "like a golden fleece, which makes her seat of Belmont Colchos� stand, and many Jason's come in quest of her." Here Bassanio is describing Portia whilst adding in mythology, it is seen as an even more impressive complement when Bassanio does this. But when someone from a lower status speaks there is no mythology but instead religious references from the Old Testament this is the same with old Gobbo, this helps the audience have extra depth of understanding in the text in the same manner that poets have. ...read more.