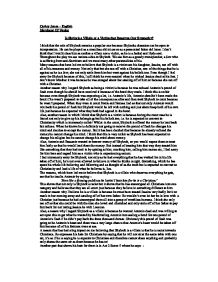 Merchant Of Venice Is Shylock a Villain or a Victim that Deserves Our Sympathy?

Carley Jones - English Merchant Of Venice Is Shylock a Villain or a Victim that Deserves Our Sympathy? I think that the role of Shylock remains a popular one because Shylocks character can be open to interpretation. He can be played as a merciless old miser or as a persecuted bitter old loner. I don't think that I would class him as neither a villain nor a victim, as he is a Jackal and Hyde sort. Throughout the play we see various sides to Shylock. We see him as a greedy moneylender, a Jew who is suffering from anti-Semitism and we meet many other personalities of his. Many reasons that have led me to believe that Shylock is a victim are his daughter, Jessica, ran off with all of his treasures and money. Not only that but she ran off with a Christian, one of the things that he is against as he is a Jew, she not only stole from him but went against his beliefs too. ...read more.

Also, Antonio and Bassanio wanted to borrow money off Shylock, so you would expect them to treat him fairly so that he would lend them the money. But instead of treating him that way they treated him like something that they had trod in by spitting at him, mocking him, calling him names etc, I feel sorry for him here and regard him as a victim who is experiencing racism. I feel immensely sorry for Shylock, not only as he had everything that he has worked for in his life taken off of him, he's not even allowed to believe in what he thinks is right. Something, which he has spent his whole life believing and following and as thought of as the truth but is expected to convert to Christianity and lead a life of what he believes is, lies. The reasons, which have led me to believe that Shylock is a villain who deserves everything he gets, are that he insults Antonio by saying: - 'How like a fawning publican he looks! ...read more.

Another part that shows his hate for them is in Act 2 Scene 5 where he says: - 'To gaze on Christian fools' This shows he judges all Christians by just one or two Christians he has met compared to the millions of other Christians there are. I consider Shylock to be extremely two-faced. I see this as being a part of a villain's personality. In Act 1, Scene 3, Shylock conveys that he is too good for Christians but in Act 3, Scene 1, he pleads for his humanity by saying: - 'Fed with the same food, Hurt with the same weapons, Subject to the same diseases, Healed by the same means, Warmed and cooled by the same winter and summer, As a Christian is?' He is now pleading that he is as equal as any Christian but earlier in the play he is saying that he is superior to them, he is contradicting himself. Overall, I think that Shylock is neither a victim nor a villain. I think I have reasoned both sides fairly and have shown that I'm undecided because throughout the play Shylock makes me feel both sympathetic and hatred towards him. ...read more.