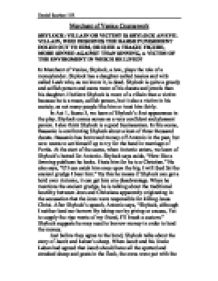 Merchant of Venice - is Shylock an evil villain?

Merchant of Venice Coursework SHYLOCK: VILLAIN OR VICTIM? IS SHYLOCK AN EVIL VILLAIN, WHO DESERVES THE HARSH PUNISHMENT DOLED OUT TO HIM, OR IS HE A TRAGIC FIGURE, MORE SINNED AGAINST THAN SINNING, A VICTIM OF THE ENVIROMENT IN WHICH HE LIVED? In Merchant of Venice, Shylock, a Jew, plays the role of a moneylender. Shylock has a daughter called Jessica and wife called Leah who, as we know it, is dead. Shylock is quite a greedy and selfish person and cares more of his ducats and jewels than his daughter. I believe Shylock is more of a villain than a victim because he is a mean, selfish person, but it also a victim in his society, as not many people like him or treat him fairly. In Act 1, Scene 3, we learn of Shylock's first appearance in the play. Shylock comes across as a very confident and pleasant person. I also think Shylock is a good businessman. In this scene, Bassanio is confronting Shylock about a loan of three thousand ducats. Bassanio has borrowed money off Antonio in the past, but now wants to set himself up to try for the hand in marriage of Portia. At the start of the scene, when Antonio enters, we learn of Shylock's hatred for Antonio. Shylock says aside, "How like a fawning publican he looks. ...read more.

In Act 3, on page 99, Tubal, Shylock's friend, brings some news of Antonio. Shylock's mood is completely turned around. He goes from being sad to very excited at Antonio's misfortune. Shylock starts saying, "What, What, What? I'll luck, I'll luck?" and "I thank God, I thank God. Is it true, Is it true?" But as soon as Tubal mentions his daughter spending some money in Genoa, he doesn't even show sadness for his lost daughter, only his riches. Tubal doesn't show anger like Shylock, towards Antonio, but sympathy. I believe this is because Shylock has had a lifelong feud with Antonio and all he wants is a chance of revenge. I think this side of Shylock makes him a villain. All Shylock is after at this stage, is Antonio's pound of flesh. He doesn't care about his daughter, Jessica, at all. Tubal says, "But Antonio is certainly undone." He does think that Shylock is a bit obsessed by Antonio's bond. One of the other main plots of the play is that of the relationship between Shylock and his daughter. They don't seem to have a very relationship. Most fathers and daughters have a very pleasant bond, unlike Jessica and her father. As we can see in Act 2, Scene 3 on page 59, Jessica very much dislikes her father. ...read more.

Gratiano continues to mock Shylock. At this point I feel sorry for Shylock in a way because al he wants to do is settle for the original bond and leave, but now everyone wants to mock and give Shylock punishment. Because Shylock has tried to kill a Venetian citizen, half of his goods must go to the intended victim and half to the state. Also, only the Duke can spare his life. Showing the mercy that Shylock would not, the Duke spares his life. At Antonio's request, Shylock is allowed to keep half of his wealth, as long as the other half go to Jessica and Lorenzo, and then all of his wealth when he dies. Also, Shylock must become a Christian. Shylock is a broken man. But does Shylock deserve all this harsh punishment? I think he should be punished for what he has done, but I wouldn't punish him as far as the Duke and court did. Because of what Shylock had done, tried to kill Antonio through revenge and spite, I think he should give all of his money to Jessica and Lorenzo, instead of just half of it. But telling him to convert to Christianity is on a whole new level. In Shakespeare's day, it was quite common for a Jew to be converted into a Christian. Nowadays though, nobody can be forced to change their religion. Religion is a big part of today's society and I believe no one should have that taken away from them. Daniel Scotton 11R ...read more.