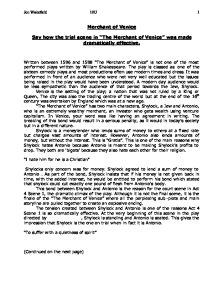 Merchant of Venice - Say how the trial scene in

Merchant of Venice Say how the trial scene in "The Merchant of Venice" was made dramatically effective. Written between 1596 and 1598 "The Merchant of Venice" is not one of the most performed plays written by William Shakespeare. The play is classed as one of the sixteen comedy plays and most productions often use modern times and dress. It was performed in front of an audience who were not very well educated but the issues being raised in the play would have been understood. A modern day audience would be less sympathetic than the audience of that period towards the Jew, Shylock. Venice is the setting of the play; a nation that was not ruled by a King or Queen, The city was also the trading centre of the world but at the end of the 16th century was overtaken by England which was at a new age. "The Merchant of Venice" has two main characters, Shylock, a Jew and Antonio, who is an extremely wealthy merchant, an investor who gets wealth using venture capitalism. In Venice, your word was like having an agreement in writing. The breaking of this bond would result in a serious penalty, as it would in today's society but in a different nature. ...read more.

Often in the play, Shylock is perceived as inhuman however, in Act 3 Scene 1, the powerful and emotive speech - " Hath a Jew not eyes... if you prick us do we not bleed" Shylock's complex character Stresses the humanity that lies beneath. Seventeen lines after this plea, he is ranting and raving over the theft of his money by his only daughter, Jessica. With very strong language, Shylock wishes that Jessica "Were dead at my foot" This wish for his daughter's death revokes much of the sympathy created by the former plea for the recognition of his humanity. Shakespeare yet again paints a picture of a malignant, murderous Jew - who in this instance - is willing to see his only daughter dead for the sake of a few ducats. This greed for money is recognised by his repetition of his demands for his bond to be followed and the constant reminder of how much he has lent Antonio - three thousand ducats. This gives the reader a powerful impression of who and what the character of Shylock is as a person. With these thoughts in the audience's heads, it is easy to see why Shylock is doomed from the start of the trial even before it has begun. ...read more.

and then increases for shylock when he is denied the money about 3 times, he is told he cant walk out of court and then he is told he has to convert religion. Shylock is being forced to convert his religion. For Shylock, this is the worst possible thing he could be made to do, as he is proud to be a Jew. Shylock is reduced to a far cry from his confident and vengeful image. The scene is coming to and end as shylock leaves the dukes court, when he does leave fellowship and peace is brought back to the play because the Christians are now dominating much like they are used to in everyday society. Justice, sadness and comedy are successfully combined in "The merchant of Venice" Many aspects of the plot such as the discrimination of Jews are still in place in today's society. The play is a comedy but to a first time reader or viewer of the play it would not seem so, the ending of the play is an integral part to the structure of the play in terms of its comedy value. "The Merchant of Venice", although I recognise that the text is open to multiple interpretations is a strong dramatic play: some interpretations can even directly contradict one another. 1 Jon Wakefield 10U ...read more.