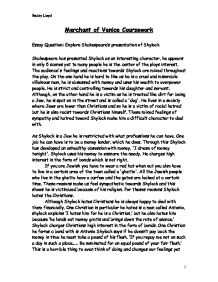 Merchant of Venice Coursework Essay Question: Explore Shakespeare's presentation of Shylock Shakespeare has presented Shylock as an interesting character, he appears in only 5 scenes yet to many people he is the center of the plays interest. The audience's feelings and reactions towards Shylock are mixed throughout the play. On the one hand he is hard to like as he is a cruel and miserable villainous man, he is obsessed with money and uses his wealth to overpower people. He is strict and controlling towards his daughter and servant. Although, on the other hand he is a victim as he is treated like dirt for being a Jew, he is spat on in the street and is called a 'dog'. He lives in a society where Jews are lower than Christians and so he is a victim of racial hatred but he is also racist towards Christians himself. These mixed feelings of sympathy and hatred toward Shylock make him a difficult character to deal with. As Shylock is a Jew he is restricted with what professions he can have. One job he can have is to be a money lender, which he does. Through this Shylock has developed an unhealthy obsession with money, 'I dream of money tonight'. ...read more.

Shylock seems to have a desire for revenge and for his bond to happen. Shylock says 'Let him look to his bond! He was want to call me the usurer. Let him look to his bond!' shylock also explains that Jews are the same as Christians and 'if a Jew wrong a Christian, what is his humility? Why, Revenge! If a Christian wrong a Jew, what should his sufferance be by Christian example? Why, revenge!' This quote seems to be in a sarcastic style but at the same time an angry serious way. I thing this passage clearly shows Shylock wants revenge and wants the bond to go thorough. Shakespeare repeatedly refers to Jewish and Christians because he is trying to show that Shylock is upset about the way Jews get treated inhumanly and less than Christians he is trying to win the audiences sympathy. When Tubal says 'Yes, other men have ill luck too. Antonio, as I heard Genoa -' shylock wants to hear more 'what, what, what? Ill luck? Ill luck?' When Shylock hears Antonio 'Hath an argosy cast away, coming from Tripolis.' Shylock is ecstatic 'I thank god, I thank god!' he seems to be gloating over his danger maybe he thinks that if Antonio is in trouble he is more likely to have the bond. ...read more.

I have been able to establish many different aspects about Shylocks character throughout the play, he is a bitter man and loves money but has had many problems in his life that make us feel sympathetic for him. He is not just an average stage villain he is more complex and you can really understand how he feels in parts of the play. Although he is a cruel man who treats people horribly including his daughter and he uses his money to his advantage to overpower people. Also we feel sorry for him because he looses his daughter and in the end he looses everything his home and money. So throughout the play we feel sympathetic but at the same time we think he deserves it. Shylock is a very memorable character as he has such an impact on many characters and is a main part of the plays interest. Shylock provokes many issues in the play and causes many problems with people. Shakespeare has displayed Shylock as a powerful character as when he enters the stage he does it in an impacting way and controls the conversations. I think I will always remember Shylock as the character who I didn't really understand and he had many issues. Becky Lloyd 1 ...read more.