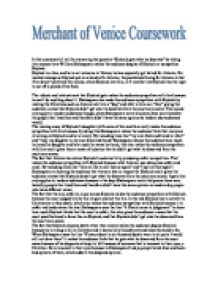 Merchant of Venice: Shylock gets what he deserves

In this coursework I will be answering the question "Shylock gets what he deserves" by taking into account how William Shakespeare makes the audience despise of Shylock or sympathise Shylock. Shylock is a Jew, and he is not welcome in Venice, he has especially got hatred for Antonio. He wanted revenge so Shylock put on a bond with Antonio; the punishment being for Antonio is that if he doesn't pay back the money, which Shylock lent him, in 3 months time Shylock has the right to cut off a pound of his flesh. The ridicule and mistreatment that Shylock gets makes the audience sympathise with him because he can't do anything about it. Shakespeare has made the audience sympathise with Shylock by making the Christians such as Antonio call him a "dog" and refer to him as a "Jew" giving the audience a sense that Shylock didn't get what he deserves from the courtroom scene. This would only apply to modern audiences though, when Shakespeare wrote his plays Jews were hated by the people that lived then and therefore didn't have the same opinion as modern day audiences would. ...read more.

Again this only applies to modern audiences because in the days Shakespeare wrote hid poems Jews were hated by people that lived then and therefore didn't have the same opinion as modern day people who have different views. The fact that the law, unfairly, is put across Shylock makes the audience sympathise with Shylock because the court judged him by his religion and not the law. In the end Shylock has to convert to Christianity or face death, which also makes the audience sympathise with Shylock because it is unfair and undermines the law. Shakespeare uses the line "A Daniel come to judgement" to show how much Shylock thinks that the court is unfair, this also gives the audience a sense that the court used the bond to force this on Shylock, and that Shylock didn't get what he disserved from the courtroom scene. The fact that Shylock chooses death rather than money makes the audience despise Shylock because he is trying to kill a Christian and it shows he is bloodthirsty and takes the bond to far. ...read more.

It is no real surprise that she ran away. This gives the audience a sense that he does get what he disserves in the courtroom scene. The fact that he cared more about the money and jewellery makes the audience despise of Shylock because they will think that he doesn't care about his daughter running away, he just cares about the money which she ran off with! By this the audience will think that he is uncaring and greedy, also selfish. Shakespeare includes the line "She is damned for it" to make Shylock sound like he wants revenge on his daughter now. This gives the audience a sense that he gets what he disserves in the courtroom scene. The way that the audience (modern or Old (Tudors)) interprets the things that happen in the play plays major part in how the audience judges Shylock because of the evolution from Shakespeare to modern day. Nowadays people don't have hatred for Jews because of the evolution of the religion all over the world, but then people didn't understand religion and interpreted it wrongly, which was an unfair disadvantage for Jews, individually and generally. By Daniel Parkin, 10GAB ...read more.