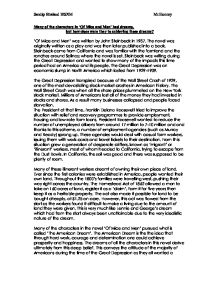 Many of the characters in 'Of Mice and Men' had dreams, but how close were they to achieving these dreams? 'Of Mice and Men' was written by John Steinbeck in 1937. The novel was originally written as a play and was then later published into a book. Steinbeck came from California and was familiar with the farmland and the ranches around Salinas; where the novel is set. Steinbeck was writing during the Great Depression and wanted to show many of the impacts this time period had on America and its people. The Great Depression was an economic slump in North America which lasted from 1929-1939. The Great Depression transpired because of the Wall Street Crash of 1929, one of the most devastating stock market crashes in American history. The Wall Street Crash was when all the share prices plummeted on the New York stock market. Millions of Americans lost all of the money they had invested in stocks and shares. As a result many businesses collapsed and people faced starvation. The President at that time, Franklin Delano Roosevelt tried to improve the situation with relief and recovery programmes to provide employment, housing and low-rate farm loans. President Roosevelt wanted to reduce the number of unemployed citizens from around 17 million to 7-10 million and and thanks to this scheme, a number of employment agencies (such as Murray and Ready) sprang up. These agencies would deal with casual farm workers, issuing them with work cards and travel tickets to their destination. From this situation grew a generation of desperate drifters, known as 'migrant' or 'itinerant' workers, most of whom headed to California, trying to escape from the Dust Bowls. In California, the soil was good and there was supposed to be plenty of room. Many of these itinerant workers dreamt of owning their own piece of land. Ever since the first colonies were established in America, people wanted their own land. ...read more.

Candy's dream comes to a close when Lennie murders Curley's wife. When Candy realises the situation he asks George, 'You an' me can get that little place can't we, George? You an' me can go there an' live nice, can't we, George? Can't we?' He asks out of desperation, as he already knows the answer. It seems as if the dream was always too good to be true. Another important character in the novel that has a dream is Crooks the negro stable buck, he represents many of the themes that can be found in the book including loneliness, discrimination and predjudice. During the twenties and thirties, there were very strong racist views held by white people against Negro and Oriental labourers. The Negroes were insulted and segregated. The word 'nigger' was not meant as a deliberate insult, as it is today. It was common placed and totally acceptable for a white person to call a black American a 'nigger'. Crooks was the only black worker on the ranch. Like George and Lennie, Crooks the stable buck is an outsider, but whereas they can find easy acceptance in the bunkhouse, Crooks is confined to his own quarters, segregated on account of his colour. In real life only very few black people worked the fields in California. Crooks is socially isolated from the rest of the ranch and has little interaction with the rest of the workers. When Candy says, 'Ya see the stable buck's a nigger', we can see how racist comments were more acceptable in this time period. This must add to Crooks' isolation and loneliness from the other men. 'I can't play (cards) because I'm black. They say I stink.' This quote illustrates that Crooks feels the pain of rejection, more than he leads people to see. In fact, he protects himself by acting like a 'proud and aloof man.' When Lennie visits him in his room, his reaction reveals this fact. ...read more.

He says he was gonna put me in the movies ... Soon's he got back to Hollywood he was gonna write to me about it.' She then tells us that she never recieved a letter. However, she rejects the fact that the person did not send the letter, but instead blames her mother for stealing it, 'I never got that letter ... I always thought my ol' lady stole it.' She then reveals that she married Curley, to spite her mother. Marrying Curley extingiushed all her hopes of becoming a film star. Curley's wife makes a connection with Lennie as they both have dreams and are both misunderstood by the other ranch workers. This is ironic as Lennie is ultimately the person who ends her dream. She understands Lennie, and in understanding him lets him touch her and dies by his hand. The irony of her death is that it is dramatic enough for a movie, and that her sad end would credit any decent Hollywood film. Curley's wife dies after confessing her lifelong dream to Lennie. It was very obvious that her dream was doomed from the start because of her rocky relationship with her mother and her sealed fate in marrying Curley. The only outlet for the characters in this book to rise above their troubles is a shared dream of a better place. From the beginning of the story Lennie and George ride high on the thought of someday owning a farm. For George, it is the expectation of being his own boss and taking care of his own place. For Lennie, it is the expectation of simply being able to pet animals all day long. When this dream is shared with others, it becomes contagious. Candy and Crooks sign on to this fantasy, which helps them also to transcend their circumstances. Without dreams these characters would have nothing. It provided them with some sort of comfort and hope in which they could escape from their harsh lives. ?? ?? ?? ?? Sandip Bhalsod 10SXM Mr.Honney ...read more.