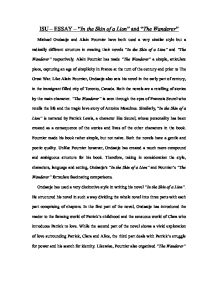 Michael Ondaatje and Alain Fournier have both used a very similar style but a radically different structure in creating their novels &quot;In the Skin of a Lion&quot; and &quot;The Wanderer&quot;

But, Ondaatje turned Ambrose to be a less likable character and focused his book on hard working immigrants of Toronto. In doing so, Ondaatje shifted his focus of novel from the powerful to the humble and unfortunate. Ambrose Small weakened into the background of the narration, and Patrick Lewis came forward as the main protagonist. Patrick Lewis is the main character and is the narrator of this novel. He wanders from place to place in search for his identity and is involved in various, diverse and complex stories. In the same way, Fournier's novel is recited by the character known as Francois Seurel who is more sensible than the main protagonist of the novel, Antoine Meaulnes. Meaulnes is the leading role player in this novel who meanders in search for his love, Yvonne. The noticeable resemblance in both the main characters of the two novels is that each of them is seeking to accomplish a goal for which they undergo enormous hardships. Patrick comes across Clara but fails to get her at the beginning of the novel and likewise Meaulnes is separated from Yvonne in "The Wanderer". In addition to the protagonists, the female characters of the novels are in many ways the most influential individuals. In Alain Fournier's "The Wanderer", Meaulnes's love was more an image of female perfection then an actual being. ...read more.

Ondaatje's unique imagistic talent, his neatness and his insubstantial use of the most dominant words, gives the novel a liquid flow, like the finest of poetry. Eventually, it can be inferred that both these novels have an equal magnitude of exquisite realism to them with a bit of attraction that makes them appealing to the reader. Both the novels have analogous characters, who find themselves in the same circumstances. The two comparative novels also have the style in common, the only difference being in their structure, which is coherent in the case of "The Wanderer" and complex in "In the Skin of a Lion". In addition, they also have the pleasant poetic language which flows resembling to a fluid and engaging the reader into them. For Ondaatje's part, he re-evaluates history, the power struggle, the search for love and finally the language as a source of authority using his main character Patrick Lewis. Similarly, Fournier drew extensively from his personal and youth in French countryside to make his affectionate fable of two young friends, Seurel and Meaulnes at the turn of twentieth century. The main theme is the search for "loss of innocence" and "beauty" along with the hunt for love. Thus, these two novels discussed above are linked together structurally, thematically, character and language wise, with their setting at the turn of the twentieth century. ...read more.